So maybe it was Robert Frost. That whole “Mending Wall’ thing:

Something there is that doesn’t love a wall,

That sends the frozen-ground-swell under it,
And spills the upper boulders in the sun;
And makes gaps even two can pass abreast.

Stone walls. We have then all over our nursery. I’ve been bringing stones home for 40 years. It began almost 40 years ago when a neighbor sold me the spilled stones of an old wall at the back edge of his centennial family farm for $100. My son and I filled our old pickup truck with 14 loads of those stones, stacked them in amateurish fashion along the edge of our property, with gravity the ultimate arbiter of our success.

A few years after that I was driving along a newly constructed road and saw a couple immense water-carved stones along its edge. Each was about five feet tall and wonderfully carved by time and erosion. Each weighed several tons.

Stone lust consumed me. I stopped the truck and spoke to the construction guy standing next to the stones. He said I could have them – but better get on it.  Those stones were going back underground the next day, hidden from view for another few million years.

I drove home in deep despair; how was a guy in a beat-up pickup truck going to get several tons of water-carved rock home? The answer was right before me. The owner of a big stone quarry was standing alongside the road, working on a sign. I barely knew the man. I hadn’t spoken to him in years, when, incidentally he’d delivered a big stone to our house in the bucket of a tractor.

I stopped and explained my problem. Nothing major – just a couple of immense stones that needed moving in next 12 hours. He was a stone guy. He understood. He agreed to take his monstrous backhoe up to my stones the next morning, load them onto a garage-sized rock hauler, and drop them off in my field. He did exactly that.

The story didn’t end there. How was I going to place those rocks in my tiny woods, right there next to where I wanted my pond, my fern garden, my hellebores.

Another nearby resident I barely knew owned a tow-truck service. I called him up, explained my story. The guy was funny. He said he was getting tired of hauling dead cars around. He needed a challenge. He perfectly placed my immense rocks in the tiny woods. Pond to follow. 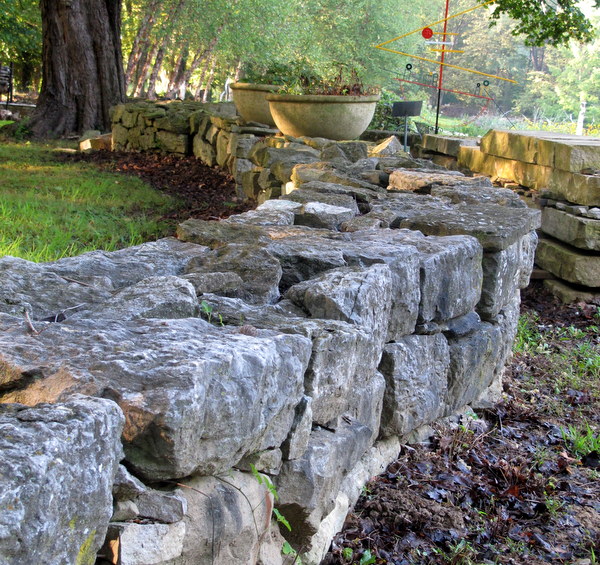 A few years after that I was lusting for some old cobble stones, those hand-fashioned rectangular stones that once paved the streets of nearby Louisville.

I heard of some for sale on the far side of town. I went to look. The few cobblestones were there, but right next to them was a sprawling pile of carved stones – stones that looked like they were anxious to become a stone wall again.

The guy said he would sell the whole pile for $1,000 – delivered. A day later two huge dump trucks unloaded my next stone wall with a thunderous clatter at the edge of my meadow. Assembly was not included.

That problem was soon solved when Juan Bacilio, a talented wall builder, came to work for us. He, and a couple of relatives, built that stone wall in three days.

Last fall, while at an event in Louisville raising funds for the city’s soon-to-be Waterfront Botanic Garden, I found a seat next to a woman I did not know. It did not matter. We were soon talking about her need to have a stone wall on her farm rebuilt – and another built from scratch.

She already had all the stones required on her farm. All she needed was Juan.

As part of the deal, she mentioned she had some creek stones I might want – those wonderful, water-carved, limestone rock that are flat on the upper side but carved into incredible, fluted, ridges and swirls on the bottom where the water ran below the surface.

We all went to her farm. Juan got the job. I got my water-carved rock. Incredible, fluted, ridged and swirled rock something on the order of dinosaur teeth. We brought them home the same day. My thoughts are to create a special rock garden with ridged and fluted edges – and then place two more of those rocks in the middle to plant around.

I’m thinking fairly low, elegant and green garden; spring bulbs, corydalis, bergenia, toad lilies, Jack-in-the-pulpit, epimedium, hellebores, small ferns and such. None of them will be allowed anywhere near my ridged and fluted stones. Not even close. It’s their garden. The plants will only add character and color.

Oh yeah, about the same time we were unloading my newest stones a guy came by with a load of old brick he didn’t need; all of them from the grounds and gardens of a nearby, almost 200-year-old house. They will be recycled in other gardens. He traded them all for an old book of newspaper columns I wrote titled “Stone Walls and River Music.”