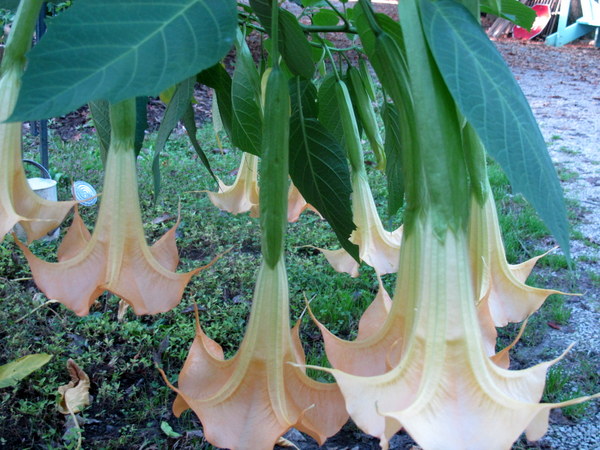 October is peeking its nose up over the horizon now, shortening the days, painting the landscape, dredging up reluctant thoughts of the leaf blower and raggedy sweaters.

And yet it’s been 90 degrees here in Southern Indiana, even as the rest of the world deals with snow, torrential rains, earthquakes, forest fires, a toilet in Switzerland stuffed with 500-Euro bills and the threat of nuclear extinction.

But I am happy to report there is no frost yet on our pumpkin, and, as a result, our brugmansia is hanging out a full flush of huge, pale-orange-yellow flowers for the fourth or fifth glorious time this year. A brassy section of Angels Trumpets about eight feet tall and five feet wide. 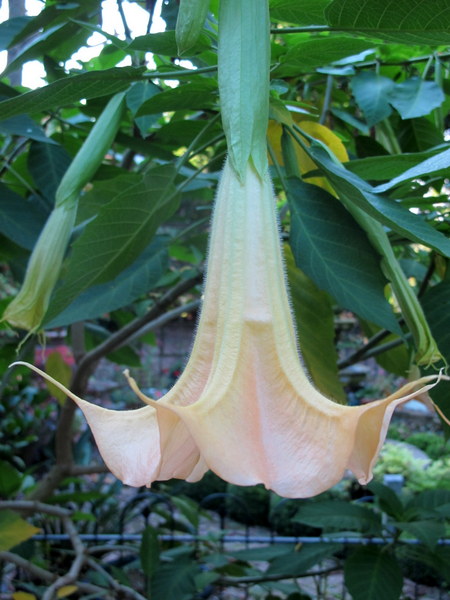 Yes, at a time when the gardener’s mind usually runs to mums, asters, beautyberry, winterberry and next year, the most noticeable thing in our yard is a zone 9-11 tropical with dangling fragrant flowers, the living personification of a cavalry charge.

Up until this year I mostly considered the brugmansia a freak show, a morbid relative of the lethal, white-hooded Datura. They hang around here, too, but mostly on their own, reemerging in odd places where it seems they’ve earned the right to, well, live.

For years our brugmansia – and we only have the one from a long-forgotten source – would just fitfully bloom a few times, and not seem all that happy about it. And for space and size reasons, I would dutifully whack it back in fall, then stuff the ugly, butchered, tightly-potted remnants into our moderately-heated winter greenhouse.

As is often the case with gardeners, my happy ignorance apparently led to our brugmansia’ s success. A little research has indicated it can take three to five years for a brugmansia root mass to thicken up to the point where it’s willing to crank out repeated blooms. The other thing is those roots like a tight space, and the fact that I never cared enough about it to move it to a larger pot worked in my, and the plant’s, favor. 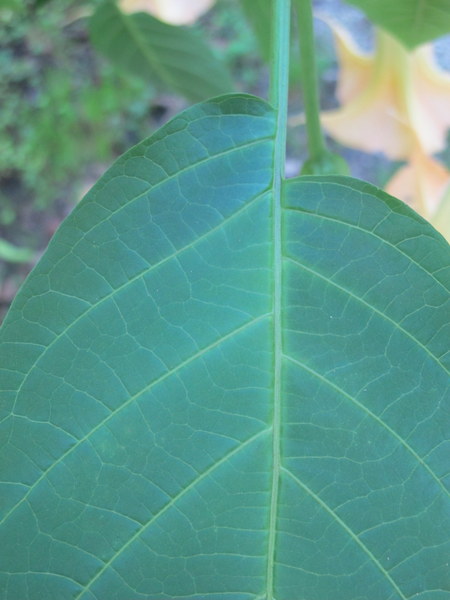 Here’s another thing I learned about brugmansia from a website named Trumpet Flowers: Brugmansia, at least in the Midwest, need to be whacked back to thrive.

More specifically, brugmansia need a Y-shape in their trunks before they will bloom. An “F”, “L” or “T” won’t get it. My previous year’s fall hacking had inadvertently created enough “Ys” to grow a trumpet section in our tightly-knit pot.

It’s only after the needy brugmansia gets its Y that it will it branch out, with each node creating a peduncle containing a covered flower bloom.

At first the flower or calyx will point upward, but as the flower grows and genetic predisposition and gravity check in, the flower hangs down in that familiar trumpet shape.

Here’s one final brugmansia factoid that’s been pretty much kept a plant secret, particularly for Hoosiers who see the whole brugmansia thing as a lark: When the plant is getting ready to create its first “Y” – and machete-wielding gardeners are not necessary for that to happen – the new leaf just below it will be a little shorter on one side than the other.

Even the folks at Trumpet Flowers have no idea what that’s all about, merely saying that “for some unknown reason, the sub-equal-leaf” – their words, not mine – “brings the promise of branching out, and thus flowers.”

That seems a little nuts, doesn’t it?  The leaf with the missing part is just a traffic sign that a “Y” branch and flowers are coming. What’s up with that – and why?

What I already did know – and mostly ignored – is that brugmansia need lot of water and fertilizing. This year we took that knowledge to heart. We watered with a five-gallon bucket two and three times a week. We relentlessly watered. We assiduously watered. We recklessly watered anytime any leaf – sub-equal or not – showed the slightest sign of slouch.

We fertilized with the same parochial enthusiasm using a 20-20-20 water-soluble mix, that powdery-blue stuff spooned into a five-gallon bucket of water, careful instructions and subsequent warnings that too much phosphate will hurt the plant be damned.

Shazam: Four or five monster, show-stopping flowerings beginning in our early summer sunshine and pushing on out into football season. Pride of ownership. Guests totally ignoring all other flora to take in their dangling beauty, which do seem to fade in color over the season. 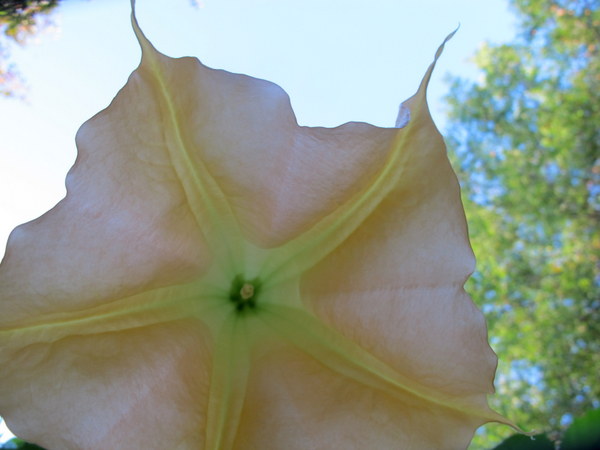 Yeah, sure, that’s our baby.

Her shows didn’t last long; maybe a week to 10 days. Then the brown-edged blossoms would all fall off, littering the ground, as our plant, apparently on orders from some sub-equal leaf, would begin cranking up another show.

There are, of course, a few million brugmansia cultivars on the market in about that many colors. It’s also apparent from my experience that you could grow them in pots outdoors in Minnesota – albeit with a lot less flowering between snowball fights.

I’m just sticking with ours –  Ms. Sunshine. She’s been faithful. She’s taught me a few things. In bloom, she owns the place. She’s even added a new edge to an old adage: “Bloom where you’re potted.”