There are few families in American horticulture with four generations of successful nursery crops. There are even fewer nursery legends with a story so well remembered as that of Jack Schultz, the 88-year-old Schultz family patriarch and founder of Springbrook Gardens, wholesale perennials growers, in Mentor, Ohio.

Jack’s dad, Elmer, started Wayside Gardens in 1916 as a road stand.  Sales were good.  J.J. Grullemans became a partner in 1920. Grullemans focused on sales while Elmer Schultz preferred production. In the beginning the business was principally wholesale. The partners shuttled back and forth between production fields in Perry and Mentor, Ohio. 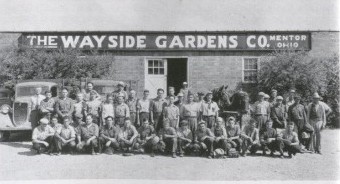 Jack started pulling weeds for Wayside Gardens as an 11-year-old in 1939. He liked the work. By the age of 13 he was running a crew of 20 kids. Jack said, “ Dad told me I could get more work out of them than any man could.”

In the early days, an estimated 60% of the Wayside wholesale production was shrubs. Schultz and Grullemans had a large contract with C.W. Stewart of New York for “20,000 of this AND 20,000 of that.” They grew 500-600 varieties of woody plants and perennials. 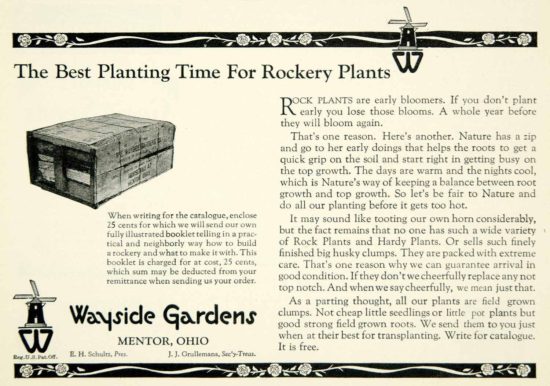 Wayside Gardens stayed afloat during the Depression.  “They went into the red one year,” Jack said. And that required cutting wood and doing anything to keep the crew working.

Elmer Schultz sold his share of Wayside Gardens to J.J. Grullemans in 1945 for $100,000. Son Jack stayed on. He loved nursery life. One day he was working with a crew, and his dad came along and said, “What are you working so hard for?”

Jack said. “Holy Christ, you never told me that before. It’s my job.”  His dad wanted him to quit, but Jack was happy with the work. “I was making 75 cents an hour.” When his dad sold his Wayside shares, Jack said, “I went to Grullemans and said, ‘I want a buck an hour.’ And they gave it to me real quick.”

Elmer, determined to get his son out of the nursery business, packed Jack off to the Greenbrier Military School in Lewisburg, West Virginia in 1945. Jack was 16.  While he was away his dad started growing plants around the house in Mentor, which became the start for Springbrook Gardens. “I only went to Greenbrier one year. I couldn’t stand it. I liked the military; I hated school,” Jack said.

Jack came home. He and his dad incorporated Springbrook Gardens in 1946. The property in Mentor grew to 20 acres and eventually to 53 acres. The land was bountiful. Elmer Schultz drilled Delphinium hybrid seed into the fertile soil. “We cut 10,000 flowering stems off that patch!” Jack said proudly. And mysteriously, “I could never do it again,” Jack added. “I don’t know why.”

The one—and only—bumper crop of Delphinium cut flowers in 1947 was wonderful in another important sense. Jack Schultz met his bride-to-be while he was peddling the flowers to local florists. Castello’s Florist became a favorite stop. “There she was. She came out of the office, wearing a plaid shirt that was tied in front of her. A picture of beauty,” Jack recalls. Mary Jane Castello was 19; Jack Schultz was 19. He was smitten. “That’s my wife,” he said. They courted for three years and were married in 1950.

Springbrook Gardens, including the 3rd generation of Schultz boys—John, Jim and Dave— began to grow their family business in the 1970s. The family stayed connected with Wayside Gardens. They contract grew for Wayside and also picked up Spring Hill and White Flower Farm. “We were doing a million poppies for Spring Hill every year,” Jack said.  “When we were shipping poppies it was 80 or 90 hours of work a week,” Dave said. 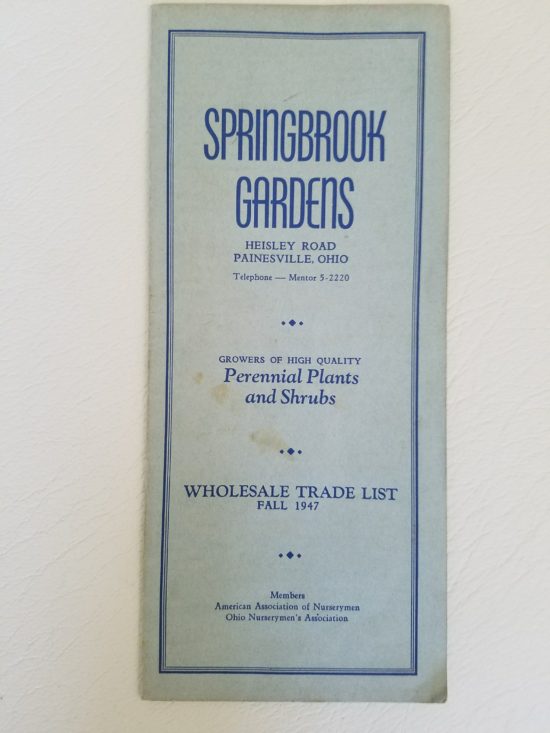 Schultz family vacations were sometimes spent traveling to Litchfield, Connecticut, to see Bill Harris, the founder of White Flower Farm. Harris wrote the company catalog under the pseudonym Amos Petingill. Harris was an eccentric, but he liked Jack Schultz. Harris invited the Schultz family to stay at his home at White Flower Farm. “Nobody believed I was going to stay in his house. He was eccentric,” Jack said.

Harris told the kids that there wasn’t anything wrong with pot. “Mr. Harris, please,” the protective dad said.

The family turned in for the evening and was shortly awakened when they heard a whistle blowing outside.  “This is what they do in New York if you’re in trouble,” Jack explained. He looked out the window and saw Harris dressed in a nightgown and cap, holding a butcher’s knife. The next morning they learned he was sharpening a knife to make breakfast. “We were frightened, to say the least,” Dave said.

The Springbrook business grew steadily. The original nursery rows were 30” wide. Son Dave remembers when they’d mark rows with a string and plant 200’-500’ rows—by hand. “And then I’d move the string,” Dave said. Row after row. Eventually, the rows were tightened to 20” spacing and finally to beds with 10” spacing between the rows. Son Jim developed a tractor-drawn, five-row planter. Bare root crops were dug with a bed digger.

In the 1980s, Jack installed a geothermal heat pump in the greenhouse. “We were the first ones,” Jack said. The annual cost for propane had been running around $18,000-20,000 per year. “And we didn’t heat very warm.” The new geothermal unit brought the heating bill down to $3,000. Springbrook recovered the cost of the geothermal investment in “one year and three months,” Jack Schultz remembers.

It was quality that mattered most. Dave remembers they would be packing an order for 25 bare-root perennials of one variety and he’d get a radio call, “’Bring me one more.’ Everything had to be done right.”

Dave Schultz left the family business in 1998 to run Kurt Bluemel’s Florida growing operation. Disney World’s Animal Kingdom needed ornamental grasses—lots of them. Millions of grasses were planted. Then the hippos and elephants were turned into their new African savannah and quickly started grazing on the new plantings. No problem. There were plenty more ornamental grasses where they came from—Floraland Farms.

“I give Dave all the credit in the world for coming down here and running Bluemel’s Florida operation and eventually buying Floraland,” Jack said.

The Springbrook Gardens property was sold in 2014. The farm had become encircled by development. The City of Mentor bought the place with plans to turn it into a park.

That’s a very happy ending for one chapter of the Schultz nursery story, but it isn’t the end. Another generation has come along. Dave son’s Jason has been working at Floraland for ten years.

Hurricane Irma paid an unwelcome visit this past September. Trees were downed and buildings badly damaged. Plants were tossed around.

The nursery still waits on FEMA financing approval to rebuild barns, but the plants and nursery have survived.