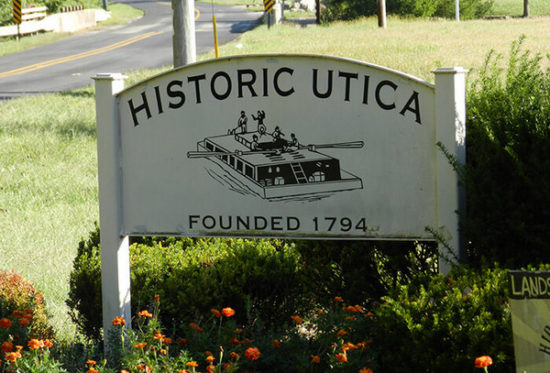 There is a soldiers and sailors memorial garden near the center of my small Ohio River town that also pays homage to our local police and firemen. Nobody wanted to leave anybody out. It’s just that kind of town.

When we moved here to Utica, IN about 40 years ago the tilted remains of an old house were perched at that corner, an eyesore that gave way to a wrecking crew. It was followed by some local guys with a few thousand bricks who created a semi-circular wall about five feet tall, most of the bricks carrying the names of the local families who donated to the project, not to forget the soldiers, sailors, police and firemen.

A raised bed was created in the middle of all that, and a poured sidewalk led out to the street. The sidewalk was flanked by two long flower beds, which early on were occupied by scruffy rows of very unhappy hostas staring up into bright sunlight –  NOT my doing.

The other previous attempts at memorial beauty included six Knock Out roses, whose alleged resistance to all manner of bugs and bacteria long ago proved to be greatly exaggerated, and some original Stello d’Oro daylilies whose brief spells of beauty were never worth the trouble.

I had donated a couple of dogwoods to the scene, along with some desultory ninebark and a very disappointing crab apple that never seems all that interested in vibrant spring color. All in all, the physical site has mostly been a memorial to horticultural mediocrity, a situation made all the worse as every person in town had to pass the site on the way in or out.

This fall, wanting and needing to begin all over again, I decided to go with vibrant rows of spring tulips in those long rows flanking the sidewalks; the roses to be yanked as soon as possible. Spring would begin a whole new botanic ballgame, with other upgrades to follow.

The inspiration for all this was a trip to Amsterdam early this spring, and the gardens of Keukenhof. My previous experience with tulips was pretty much limited to providing food for squirrels. Yet photos of complete tulip success in other places, and the knowledge that the Cincinnati Zoo and Botanical Garden planted 100,000 bulbs for its annual “Tulip Mania,” made it seem possible to succeed right here at the soldiers and sailors and police and firemen memorial.

But it was Keukenhof, a mere 4,202 miles from home, that did light my tulip bulb. Here was a 79-acre park in which seven million tulip bulbs are planted every year. Yet it is only open for about eight weeks in the spring as its magic takes form in dozens of bright, vibrant beds shaped into animal, vegetable and mineral, the beds curled around long paths and lakes, hidden beyond slopes or raised up on sprawling structures.

The garden hosted a record 1.7 million visitors this year, a number that would have dropped to a mere 1,699, 998 had my wife and I not visited. There are no words to describe Keukenhof. It must be lived, walked, touched, felt, inhaled, remembered – and then taken home to Indiana to give it a shot on a slightly reduced scale.

We did, however, bring a bit of Keukenhof home with us. We ordered about 200 bulbs of various bright colors while we were there in late March, then saw them arrive on our back porch this fall from the necessary American distributor, which did slightly lessen the glow. I was almost willing to pay the shipping cost directly from Keukenhof.

Learning my squirrel lesson, we planted many of them around our house in containers, fancy pots and other collected receptacles which can be easily placed as needed for spring-time viewing. The rest were taken down to the soldiers and sailors and firemen and police memorial and planted in those long beds along the sidewalk. Each planting was covered in chicken wire to keep out the four-legged criminals.

The bad news was there were not enough Keukenhof bulbs to finish the rows. Busy with other stuff, I decided to just go with the half-rows of tulips as an experiment. Then I got a call from a friend who works at a local big box store who said she had 200 screaming-red tulip bulbs left in the garden area; all mine for 85 percent off.

Some things are supposed to happen. She had hidden the bulbs for me in the garden area check-out booth. I snatched them up, checked them out of the store and planted them along the remaining sidewalk space at the soldiers and sailors and police and firemen memorial garden – as well as some up on the raised bed garden facing the street.

It was all so international, so much fun, so rewarding. Amsterdam meets Indiana. I do have to wait until spring to see the show; so will the visitors to Keukenhof.