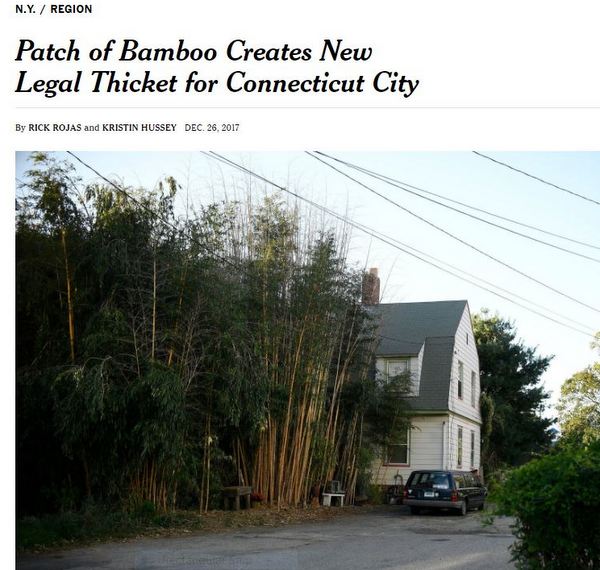 From articles in the New York Times and the New London Day I learned that the City of New London, CT has declared overgrowth of bamboo in the yard of resident Carlos Carrion a blight. After failing to pay fines and ignoring orders to cut back the plant, he’s become “one of the first to be criminally charged under the city’s expanded blight ordinance.”

The thicket of bamboo reaches 20 feet – above the utility lines – and pushes to the edge of the property.

Carrion’s defense? Calling the charges a “politically motivated witch hunt.” Another is an attempt at sympathy by claiming the bamboo was a “gift from a friend, a Vietnam War veteran, and he keeps it as a tribute to him.” He says he eats the bamboo and uses it to construct furniture. Another tactic is calling his bamboo a rebellion against “perfect square lawns.”  So now he’s Mr. Eco-Gardening.

Are there any more bogus defenses he could have used? I can’t think of one.

The local law that  he’s charged under limits the growth of plants, except for shrubs, bushes and other cultivated plants, to 10 inches. I wonder if it’s unique to Connecticut that violations of zoning and building ordinances can result in criminal charges, with punishment including fines of up to $250 a day. And is Connecticut the rare state that doesn’t declare running bamboo to be invasive? It simply places limits on where it can be planted and requires plant sellers to warn buyers that it is a fast-growing plant that needs to be contained.

Carrion claims that his bamboo is of the clumping variety, therefore not invasive. Though when he protests that he “keeps the plant from crossing from his property,” doesn’t that tell us it IS invasive? As do reports of neighbors having to cut back the stalks that crept over property lines.

Then there’s how the stuff looks – unsightly. In addition to the overgrowth of bamboo, Carrion has been cited for having an abandoned car and debris outside the home. The complaint says Carrion’s property “is in the condition of an individual who could be best described as a ‘hoarder.’”

Comments to the story in the local paper run the gamut – from surprise that bamboo is a problem to defending most bamboos as not a problem, to a horticulture professor’s statement that “Bamboo cannot be reasoned with…I think it should be banned in all but the most restrictive conditions.” Another wrote, “Heed this message. Don’t plant bamboo outside, keep it for indoors use only.”

A commenter who observes the plant business wrote that the “Bamboo sold as ‘non-invasive’ to encourage sales is only a little less invasive than other varieties. Think buying a mini pig that ‘only’ gets to be 80 lbs. or a ‘dwarf’ pine that ‘only’ gets 60′.”

And who can argue with the commenter who wrote, “Everybody loves to say live and let live, but let’s face it – nobody would want to live next to that.” Amen.

Hat tip to Lois Hinrichs of Columbus, OH for alerting me to this story.