Typically, growers in the hort industry fund plant trials (like the ones at Penn State I visited last year) to find out from actual research which plants they should put into production and then market like crazy.

But homeowners need trials of plants that are already on the market so they’ll know which ones to buy at the local nursery or from their favorite catalog. That’s exactly what Mt. Cuba Trial Gardens are for, but because they target native plants, they’re testing not only horticultural performance – especially disease-resistance – but their ecological value, too – especially their appeal to pollinators.

Mt. Cuba can do this because their research doesn’t depend on industry funding, thanks for their nice fat endowment!

I recently received this report from Mt. Cuba announcing the results of their Phlox trials and was so impressed, I bugged Horticultural Research Manager George Coombs to explain the process to me. He confirmed that almost all the 94 sun-loving phlox they tested over three years were bought at retail and are widely available to regular gardeners. Still, he’s seen his retail-focused trials also impact growers’ plant choices, which ultimately benefits home gardeners.

Coombs says the goal of Mt. Cuba’s trials is simple – to make home gardeners more successful. Modestly he adds that their best-results plants aren’t the “end-all-be-all but the plants DO perform well for most people.” Well, what more can you ask?

The top performer in their Phlox-for-Sun trials was the Phlox paniculata ‘Jeana,’ which is a new one to me and at 5 feet tall, I might not have even guessed it was a Phlox. It actually won in both categories – attracting the most butterflies AND performing the best horticulturally (disease-resistance, etc.) It flowers from mid-July through early September.

Mt. Cuba’s Delaware location makes it a great place to test for powdery mildew, a disease that afflicts plants in humid regions like the Mid-Atlantic where we hear “It’s not the heat; it’s the humidity” dozens of times each season.

Butterfly action in Mt. Cuba’s trial gardens was monitored by Pollinator Watch, a group of 25 dedicated volunteers of all ages who are enrolled in a certificate program at Mt. Cuba. Coombs told me is “very invested.” I wish I lived close enough to enroll myself. 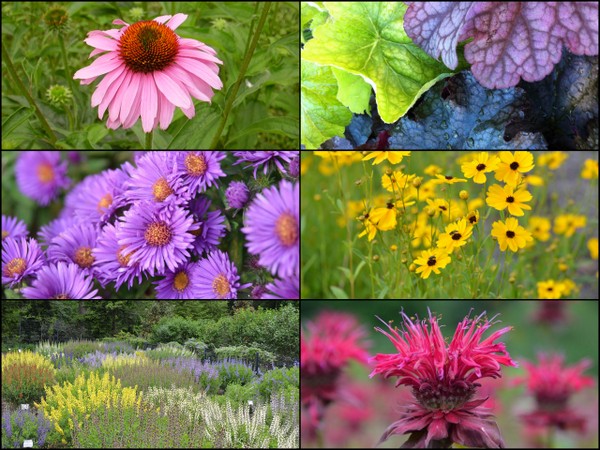 Next up: Helenium (Sneezeweed) and Carex, with 80 species to test for a variety of garden uses, most promisingly to replace lawns!

Helping gardeners find native plants that do well in gardens is badly needed, so kudos and thanks to Mt. Cuba for their hard work and dedication to not just promoting natives but helping gardeners succeed with them.  That’s my goal, too, in collecting videos on that very topic. Too many lists of all native plants in a region may help in ecological restoration projects but in matching homeowners with successful garden plants, not so much.