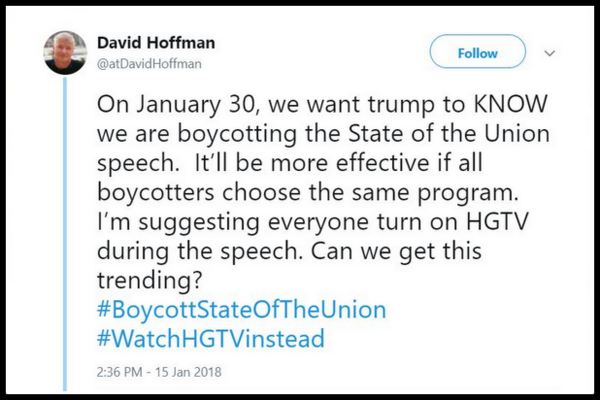 A Twitter-following friend alerted me to the hashtag “WatchHGTVinstead” started by a David Hoffman. The purpose is to deny Trump high ratings for his State of the Union performance in the most effective way possible – by tuning in to another channel, especially one in particular.

Responders argued over how ratings work but Hoffman set them straight. But tons of comments about his choice of channels. Turns out, HGTV has more fans than I realize – house hunters, rehabbers and shoppers and not a single gardener that I know of since gardening has been virtually abandoned by the channel.

These responders seem to happy to go along:

One tweeter thinks the channel has actual gardening content:

But this one knows better:

Hoffman’s response to the complainers? “And if you don’t like hgtv, take one for the team!”

The latest from Hoffman is that “Thousands on Twitter have now committed to boycotting the State of the Union address. Instead we are tuning in to HGTV to show our numbers. Several Nielson families have committed to participate so far. I’ll be retweeting until the STOU.”