Flowers have left the building, as far as the Olympics are concerned. In Rio (2016), medalists were given little sculptures made of resin, polyresin, and PVC, because flowers were “not sustainable.” And this year, in Pyeongchang, the athletes are waving little stuffed animals (tigers) from the podium. There are symbolic reasons for the tiger choice, which make sense, and they are kind of cute (unlike Rio’s resin doodads). But I’m not buying the sustainability argument. Cut flowers are ephemeral. You enjoy them, they fade; they can be composted or even thrown on the ground to decompose. Nothing that’s produced and given en masse is going to do well on a sustainability smell test; my take is that flowers are no more guilty than most gifts. But they’re gone. It appears that London will be the last Olympics that came with bouquets, unless something changes. Thank god for Valentine’s Day, which is creating enough of a flowery atmosphere that I don’t mind so much. People need flowers in winter. 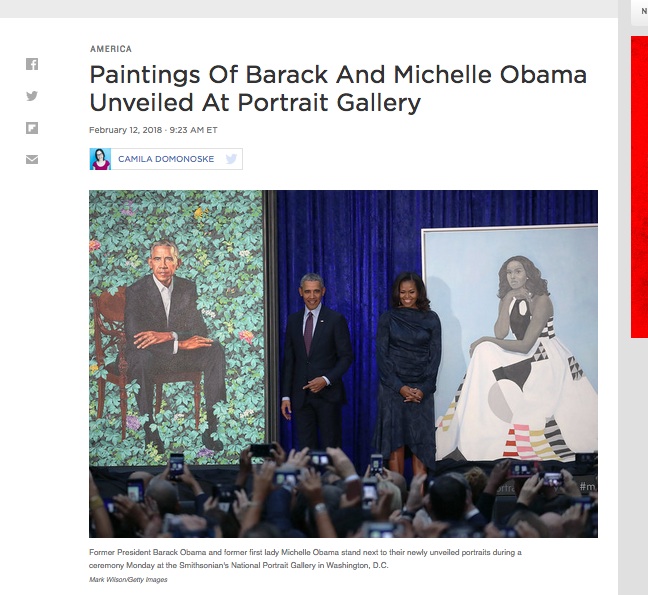 Count me among those with two big thumbs up for both of the Obama presidential portraits. You can read about them everywhere; here’s one place. I particularly like his. I was immediately charmed by the backdrop of foliage that artist Kehinde Wiley explains is studded with flowers that have personal significance for the former President. I am not sure what the greenery is; it looks like a cross between Bishop’s Weed and some really aggressive vine. Maybe someone here knows. To many, the backdrop is surprising, but if you look at other portraits by this artist, an ornate, patterned background of some type is almost always used. It is a formal device and I wouldn’t read that much into it except that it makes a lovely change from the usual blurred or nonexistent surroundings used for official portraiture. We have a big wall of Boston ivy that local photographers have used for portrait backdrops; it’s a nice look. I think so, anyway.