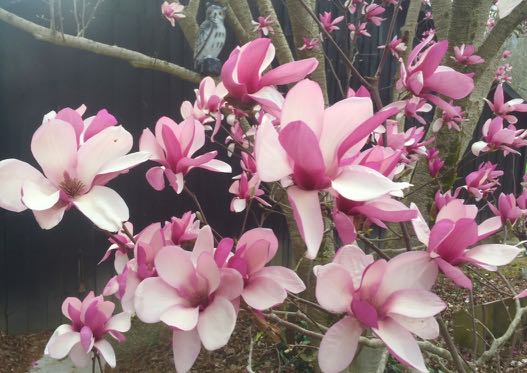 “I would rather have thirty minutes of wonderful than a lifetime of nothing special.”

Our saucer magnolia had a tiny bit of stamina left, but I didn’t think it was worth saving. Sapsuckers had just about taken the life out of it three years ago. I wanted to cut it down. Rose would have none of it. My buddy the arborist Robert Rollins intervened. He listened to both impassioned sides. His advice: take it easy; give the tree the tree a little time.

Robert’s crew drastically cut back the dead limbs, approaching one-quarter of the entire canopy. Dozens of weak sucker sprouts grew that first year. Surprisingly, since then, the tree has kept chugging along.

I kept asking around.

Paul Cappiello, Executive Director of Yew Dell Gardens in Crestwood, Kentucky, emailed an explanation of what’s going on with our stressed tree.  “It could be that the sapsuckers have so cut off the upper part of the plant that the plant is forcing out sucker growth further down the trunk—sort of a weak spot in a hose springing a growth leakage rather than all the energy and water getting up to the top of the plant.”

Our neighbor Otis Knox planted the Magnolia x soulangeana in the early 80s, down near the barn and the old corncrib. Otis once owned our place in Salvisa.  He lives across the Salt River from us now. A few weeks ago I asked Otis about the wood-pecking sapsuckers. He didn’t remember that they had been a problem on his watch. 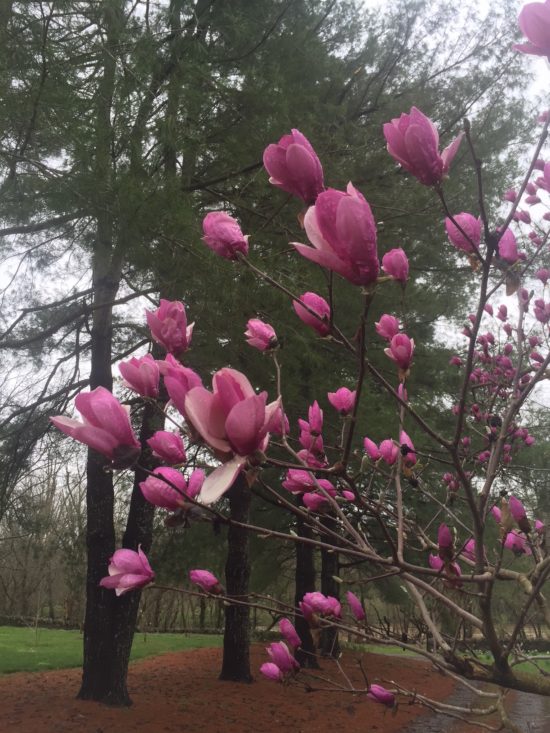 Rings of shot holes, from the base of the tree to the top, disrupted the flow of sap and cut off portions of the tree’s nervous system. The damage is telltale.  Too many shot holes can kill a tree.

Sapsuckers seem to be picky about their tastes. In our case, they chose Otis’s tree.  There might be something special about this magnolia’s sap—its unique, sweet nectar. If there had been a dozen adjacent saucer magnolias, it’s possible the sapsuckers would have ignored them.

We hung an owl decoy in the saucer magnolia. We haven’t heard or seen sapsuckers since.

Otis has always loved trees. He planted a dozen white pines down here in 1976. He’d brought them up from near his family’s home place in the mountains near the little town of Bowen in Powell County, not far from the Red River Gorge. One of the pines spawned a witches broom years later. Nurseryman Karl Klein, from Crestwood, KY, grafted a few pieces of scion wood from the witches broom onto seedling white pines. I named the little tree ‘Otis Knox.’ I have it planted in the garden. It’s nothing remarkable (witches brooms on pine trees being a dime a dozen). But the little pine means a lot to me because Otis had a hand in the planting of the original pines.

Otis loved this land. Rose and I are heirs to his legacy. Besides planting dozens of trees, including oaks, a few black gums, yellowwoods, coffee trees, service berries and redbuds, we have also planted a few magnolias.

Otis asked me a few weeks ago if I’d ever seen a wahoo tree. I wasn’t sure what he meant. Was he thinking of the wahoo bush (Euonymous americanus)?  He said no.

I’d never heard of the big leaf Magnolia macrophylla being called a wahoo tree, but Otis said this was how it was known around parts of Eastern Kentucky.

He said he’d once brought back a wahoo tree from the mountains and planted it at his current place across the Salt River from us. The tree didn’t make it.

Three years ago I planted a one-gallon wahoo tree, or big leaf Magnolia macrophylla, about 30 feet from the damaged saucer magnolia that Otis had planted in 1981. The wahoo tree is a pokey thing. Ours is only three feet tall today but it might eventually grow from 50’ to 75’ in favorable conditions.  Rich, evenly moist, slightly alkaline to acidic soils would be the preferred ones.

I often think of Otis when I walk by these special magnolias on my way to the barn. One Magnolia has endured cold and drought for 37 years but seldom suffered for lack of attention—too much so from sapsuckers.  The other is a pampered newcomer waiting for center stage.

I don’t know who will show up, but I hope one day there will be someone else curious about these wonderful trees.

There will be a stone bench waiting next to the crooked corncrib.