More than 90 garden bloggers got together for three days of garden touring in Austin last weekend. It is a return to the first such get-together, which took place in April, 2008. I was one of those Austin, 2008 bloggers, organized a similar weekend in Buffalo in 2010, and have attended other Flings, as they’re called, in Chicago, Seattle, Asheville, Toronto and the DC region. (I missed the ones in San Francisco, Portland, and Minneapolis.) So there was no way I could miss the return to Austin and boy, am I glad I didn’t.

The great thing about these Flings is that they are pure garden-viewing pleasure. No sessions, few (if any) talks, and lots of time to hang out. There is always at least one group dinner with raffles and a couple short speeches. One can spend an entire weekend with professional colleagues without once having to sit in a poorly lit hotel seminar room with inexplicable carpeting. Instead we sit on the steps overlooking a fabulous pool or a jaw-dropping burst of perennials and discuss the garden or just catch up on each others’ lives. That’s the way it should be.

• After viewing the amazing Jenny Stocker garden, which is one of the truest and best example of how to create “garden rooms” that I have ever seen (you won’t be able to tell from my images, sorry), fellow Buffalonian Jim Charlier and I had an interesting talk. He said he liked the garden all the more because the couple who lived there had done much of the labor themselves. I objected to this—what if they simply directed other (younger, stronger) people to do the work according to their original design? Why would that be not as admirable? We never resolved this. In any case, I would never be able to do it, but the rockwork here is spectacular. Hard to photograph really well; you’d want a drone. 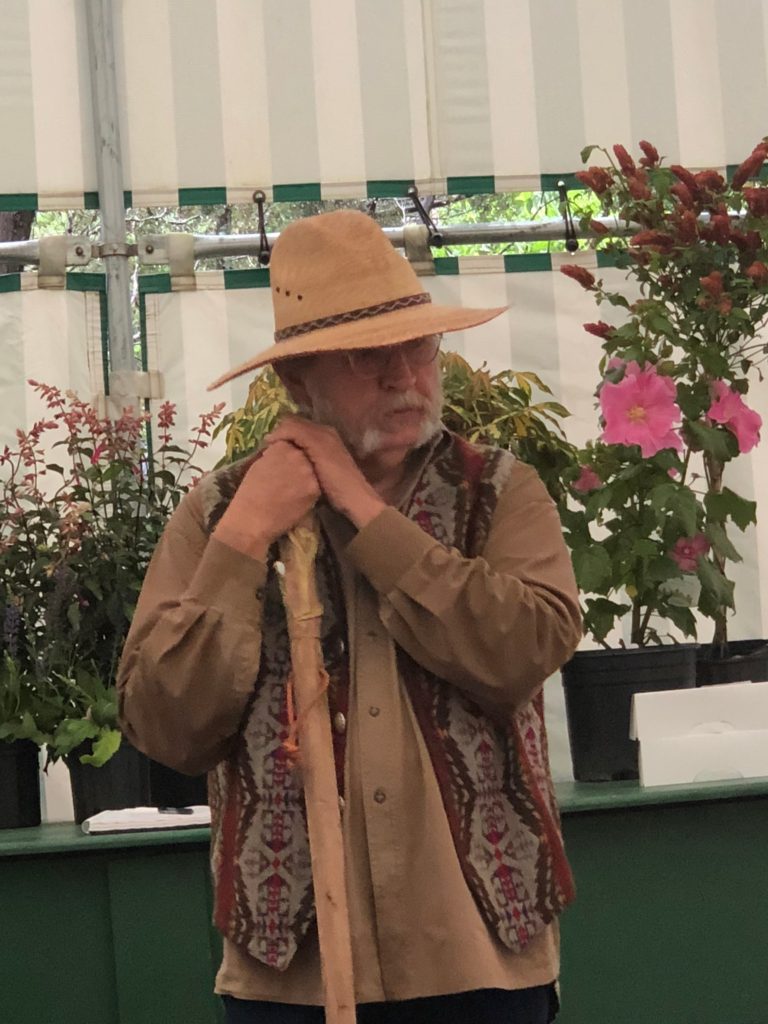 • One of the few talks was given during lunch at the Natural Gardener by the founder of this wonderful nursery. John Dromgoole (above) fought the good fight against a pesticide-prevalent gardening culture back when it wasn’t popular to do so. He did it through gentle persuasion and beautiful display gardens grown without unnecessary chemicals. I was moved by his sincerity.

• One of my favorite companions during the tours was longtime friend Layanee DeMerchant (Ledge & Gardens), who is part of a group that first met in Austin, 2008. We’ve all stayed in touch but actually see each other in person far too little. Layanee and I kept up an ongoing discussion of the garden critique. Her view (and I suspect most of yours): if it works for the gardener, it’s OK. I see the value of this perspective, but the critic in me refuses to be suppressed. I’m happy to say that critic made scarcely a peep while touring these gardens—the point of the Flings is to show off the best as well as provide good variety. Austin succeeded magnificently in this regard.