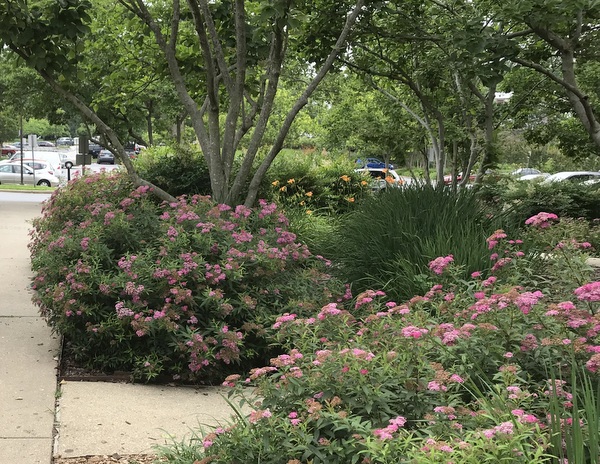 There’s nothing like working to improve city landscaping to turn you into a realist, having abandoned what you really want for what’s most likely to happen, given the usual constraints of manpower and budget.

In my last post I showed readers the sad, unweeded state of one of my town’s most prominent perennial beds and suggested it needed to be returned to turfgrass. (Please read about the constraints of the site before freaking out.)

But this post is a happy story already because just across the parking lot is our equally historic Roosevelt Center (named because the town was created as a project of the New Deal) and here the beds look great with almost no maintenance – thanks to full-grown shrubs. Yes they’re the common ‘Anthony Waterer’ and even commoner Nandina domestica, which probably wouldn’t be chosen today, but it’s thriving and a popular place for birds nests. 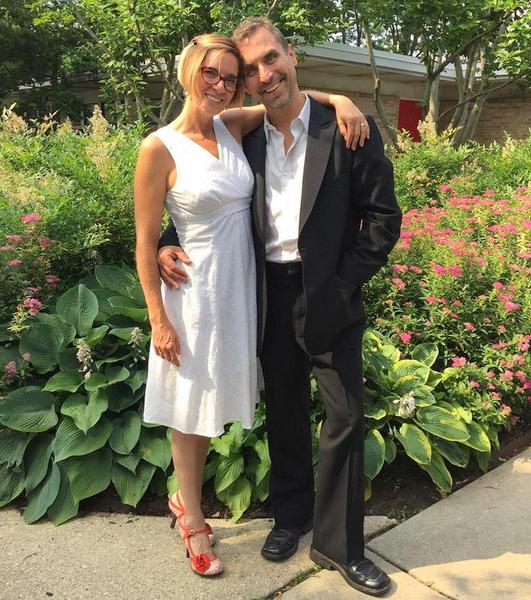 Above is a panorama shot of the most common pedestrian approach into Roosevelt Center on the right. You can see there’s still room for clumps of perennials here and there, though not all of them like it. The worst are the hostas in this sunny spot; they’ll look burned-up from late June until frost.

Misplaced hostas don’t seem to stop people from loving this spot and occasionally using it as a backdrop for portraits.

Here we see the cut-flower farmers I profiled in this post, with the farm. They were in town this week and posted this photo to Facebook, clearly enjoying the chance to dress up a bit and show off some fancy red shoes not suitable for the farm. 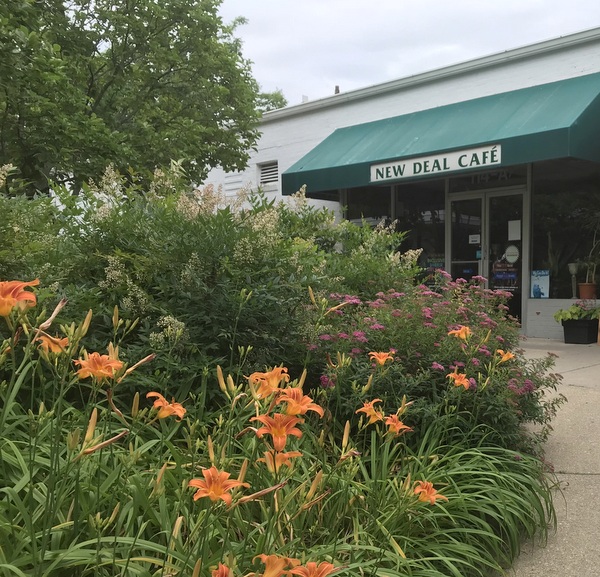 In this view I’d love to see some low shrubs here instead of these common daylilies, which look fine to me when they’re blooming and like crap the rest of the year. People see this small garden at such close range, there’s no room in it for mostly-crappy-looking plants. 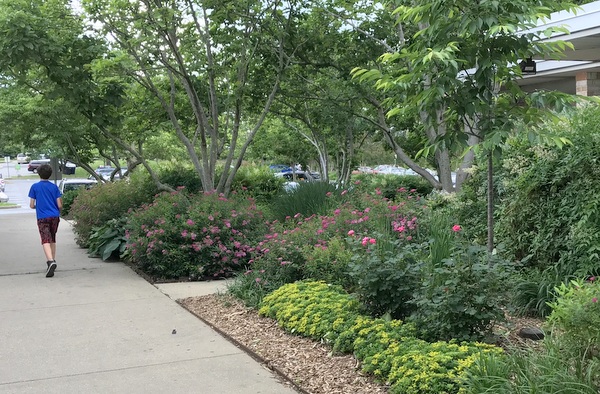 On the right in this photo is the sunny little ex-weed patch in its second season after I rescued it. And here too I think it needs fewer perennials and a couple more shrubs.

The Sedum groundcover (S. takesimense) is a big hit and I plan to let it spread, though last summer I worried for its survival in this spot. Passersby were letting their dogs dig and uproot whole chunks of it, so I’ve moved it away from the sidewalk a bit and now I’m feeling optimistic about its survival, dogs be damned. 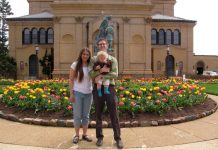