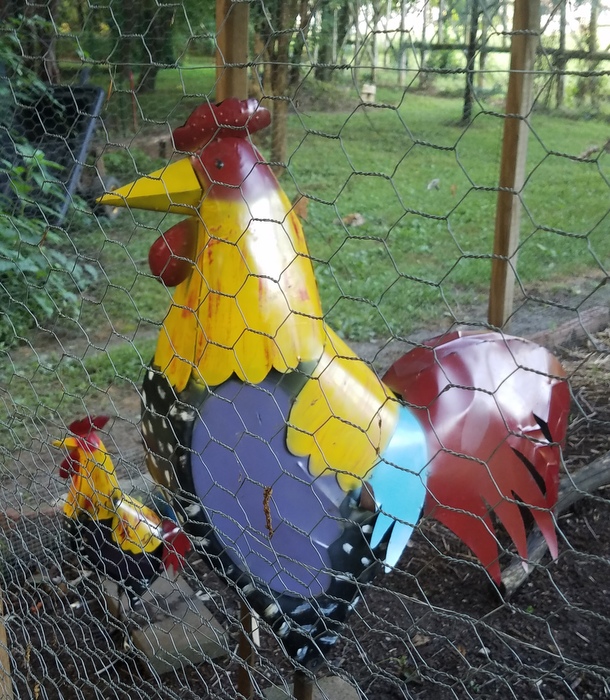 In the end it came down to a pair of ornamental tin chickens, both of them, no doubt, created in a distant and dangerous land soon to be confronting more tariffs – or less.

So it goes in the modern yard-art department where, at some point, everything seems fair game or fowl.

My taste in such in our Hidden Hill Nursery & Sculpture Garden has been running more toward tin chickens of late. That’s partly because every botanical garden and arboretum in the world has now been overrun with Chihuly and such. I do often enjoy those gardens’ massive fountains and carved limestone behemoths, but I do not rob banks or cajole the rich for a living.

Some days you just have to settle for tin chickens.

I started collecting garden art with even more modest goals. The nearby Ohio River provided limestone fossils from the Devonian era; anything that had been around more than 400 million years seemed like a worthwhile investment in time and dirty tennis shoes.

Once there, driftwood also became fair game. It floated in from Pittsburg and beyond, its bark washed smooth, its stunted limbs offering a polished ballet with previous performances upriver in Cincinnati, Ohio and Madison, Indiana.

Yeah, sure, blocky, limestone fossils and well-worn dead trees lining a raised-bed garden. That old stuff. It could make a guy interested in tin chickens.

I went through the usual rustic, garden art phases. Church bells. Shovels shaped like angry birds. Cut class bottles. Wheelbarrows filled with rainbows of caladiums. An ox yoke. Plow shares. Old horse-drawn plows. Painted wooden signs that said, “Beets me.” And, yes, God help me, rubber tires painted pink and planted in purple petunias and hung from trees, but only to mock Chihuly and his ilk.

Gradually my tastes changed, some might say even improved. My secret was to befriend local artists who had taste, talent, and, as with many artists, preferred to see their work in our meadow rather than stuffed behind the lawnmower in their garages.

I paid a lot more attention to genuine upper-case Folk Art and artists; people who can create stuff just because they can. You can’t teach it. You can’t imitate it. They just see something where others see nothing and do it. 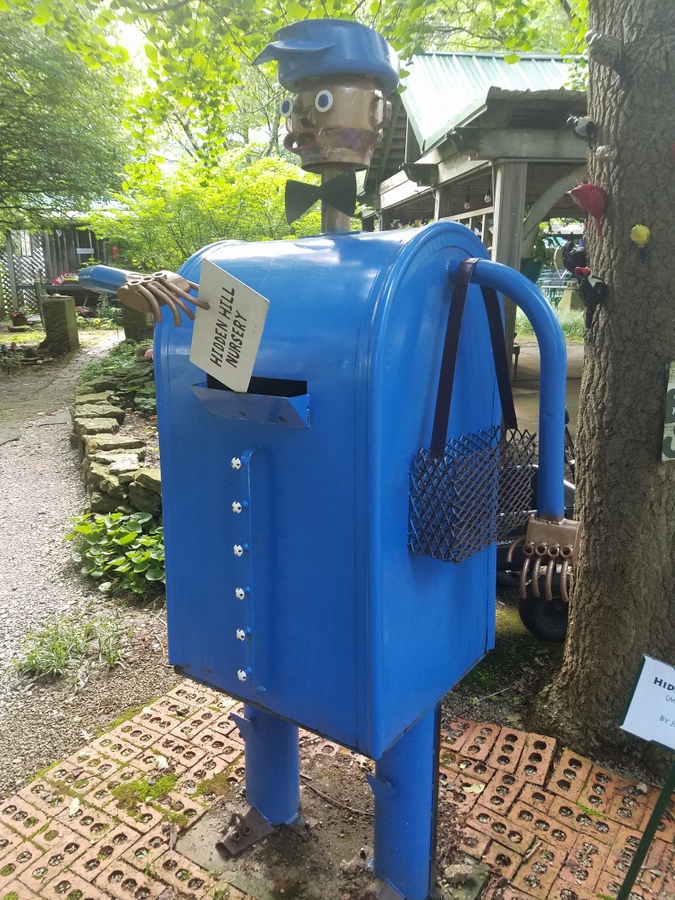 The results include our Wizard of Oz-like “Watering Can Man” and our “Federal Offense” mailbox.

Certainly, our tin chickens do not roost in that territory. With them I envision about 500 workers sitting in unheated tin buildings cutting up pieces of salvaged metal and making chickens for about $12 a day. The man or woman painting them in their bright colors might get $14 – subject to tariffs.

My reason for the tin chickens was that we already had the empty chicken coop. Our earlier attempt at raising genuine, yellow-yoked farm-grown eggs had gone south. Our coop needed some low-maintenance presence.

We did have some chicken-raising experience. But this time around the original seven fully-formed chickens were quickly reduced to 14 unattached legs by some hungry varmint.

Our next attempt was 12 chickens reduced to zero chickens over about six months due to varmints, illness, bad karma and their refusal to lay eggs after a certain point – with the final three slackers ending up in an employee’s oven. We had warned them.

But our empty chicken coop remained. It had been a $1,000 investment, not counting another roughly $1.6 million spent on treated lumber, chicken wire, lights, heaters, feeders and bales of straw. A good MIT accountant would have estimated our costs per dozen useable eggs at about $15,000 a carton.

But here’s the deal. If part of your reason for living is to mock certain art, pretentiousness and Chihuly, what better way to do it then placing a couple of tin chickens next to your chicken coop.

The opportunity presented itself at a mammoth, corporate-looking glassed-in Northern Illinois nursery that offered at least one of every tree, shrub, flower, fertilizer type, porcelain pot, shovel, hose, watering can and green-lawn push mower in horticultural history.

Its knowledgeable employees sort of wandered the place in a rosy glow, surrounded by all that was good and holy, seemingly willing to die there in the back room potting up perennials if it came to that.

And there, near that back room and another quarter acre of garden stuff, were two tin chickens. What seemed to be a rooster about four-feet tall and a smaller guy with tinny pretensions. On sale. And us only about 400 miles from home and a pickup truck already full of trees, shrubs and flowers I couldn’t live without.

No problem. The chickens got safe harbor in a relative’s garage until we got back up to Northern Illinois. They got a ride home in the back of our beloved Honda Odyssey – our 146,000-mile baby – along with more much needed plants.

We cleaned out the chicken coop and its run of extraneous chicken bit, placed the two tin chickens near the end facing our nursery, and stood back in awe and full customer appreciation.

There is the distinct possibility that da Vinci’s “Mona Lisa” or Rodin’s “The Thinker” might garner a little more praise, but I’m thinking we’ve got Chihuly worried.