We’ll start here. When you look at any suburban and most urban neighborhoods, what do you see? If asked to describe it as an ecosystem, what would you say? Invariably, our neighborhoods are a place of trees, shrubs, herbaceous plants, and some lawn, a relatively open space where herds of deer and joggers roam freely.

As such, the suburban landscape is clearly a savanna. The same could be said about city parks and almost any garden made since the time of Adam and Eve. And this is no dumb accident. Subconsciously, we have consistently recreated around us a facsimile—sometimes done well, more often not—of the most life-sustaining ecosystem on terra firma.

While forests and fields can support a surprising amount of life, it is where they come together that real bounty holds court. And bounty, abundance of life, is what the best of gardens convey and how they impact us the most. Conceptually, bounty ensures us, as humans, of good times now and at least some distance into the future. Important stuff for the guy trying to select a variety of pickles at the grocery store, but especially real for the early humans who existed for tens of thousands of years before us, and who, apparently, imprinted their ideals of existence deep into our modern DNA.

Having read the above opening paragraph, my wife, Michele, found a Ted Talk online that she had listened to some time back. The talk discussed a study conducted by the Russian-American artist, Alexander Melanid. He was interested in learning what types of paintings people liked most. Surprise, it turned out to be a certain type of landscape painting, which is well described below by Denis Dutton, a Philosophy professor from New Zealand who participated in the program:

“This [preferred] landscape shows up today on calendars, on postcards, in the design of golf courses and public parks, and in gold framed pictures that hang in living rooms from New York to New Zealand. A landscape that just happens to be similar to the Pleistocene savannas where we evolved. It’s a kind of Hudson River School landscape featuring open spaces of low grasses interspersed with copses of trees. The trees, by the way, are often preferred if they fork near the ground. That is to say, if they’re trees you could scramble up, if you were in a tight fix.

“The landscape shows the presence of water directly in view, or evidence of water in a bluish distant, indications of animal or bird life, as well as diverse greenery, and finally, get this, a path. Perhaps a riverbank or a shoreline that extends into the distance, almost inviting you to follow it. This landscape type is regarded as beautiful even by people in countries that don’t have it.” 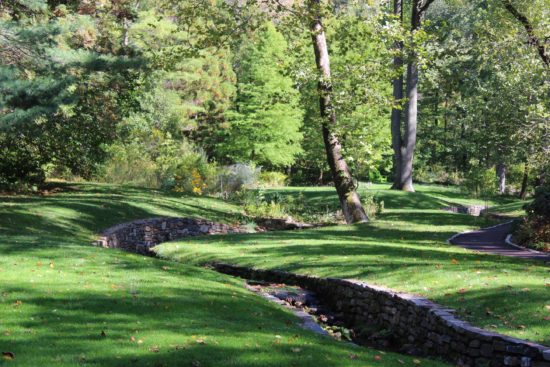 Taking that and running amok with it, I’ll just posit that it should come as no great surprise that Horticulture, the premier art form joining humans with nature, so often also emulates these epic places of bounty, and then adds on a layer of safety and comfort. Given this, perhaps we should ensure these two simple ideas wind up on the mission statement and resume of every garden:

Now, under these preconceptions, the plant aspects of a garden come relatively easy. Create a rich and diverse mix of trees, shrubs, and herbaceous plants and, son of a…, you’re more than halfway there. Add a water feature and a handful of food-producing plants and now you’re just showing off.

It is the hardscape aspect of garden where things get a bit thornier. Too often, we over-hardscape, creating cumbersome behemoths. How often do super-sized outdoor kitchens or sun baked stages, er, I mean, backyard decks, go underused, where if we had better put them into the context of a rich garden they would have better served their intended purpose?

After all, grilling burgers in the dappled shade of a private garden with friends having drinks and asking about your columbine is pure joy. Grilling burgers in blaring heat, in full view of every neighbor and even astronauts in space while standing on some boards hammered to the side of your house while your friends party in the air-conditioned family room is not.

Yes, I have no doubt that hardscapes need to be thought out better and put in the context of our deeper selves. Maybe these simple rules should apply. Hardscapes should:

A good chef will tell you that a great dish is 90% culinary artistry and 10% presentation. The good garden, which can do so much for our heart and soul, mind and body should be considered the same way. 90% artistically assembled savanna, 10% presenting hardscape. After all, we need hardscapes. A garden without them is called a red hot mess. But a garden dominated by them is truly missing the point.