I was reporting for jury duty, feeling anonymous in a pool of fellow citizens, when the court officer asked me how far back she could prune her landscape roses this fall. I sighed, and as everyone craned their necks to see whom she had addressed, I told her as much as she likes…but not now. Maybe in March.

The calls about pruning start every autumn with the first breath of cold air. I should probably make a recording to save my own hot air, as I feel compelled to explain at length the many reasons that you should not prune in fall.

Autumn pruning can have several negative consequences. Done too early in fall, fluctuating temperatures and rain may induce the pruned plant to initiate a flush of growth. This tender new foliage will be singed badly by the first cold snap, so you wasted the plant’s energy stored for next spring’s flush.The cut stems will not heal through the winter, leaving the plant open to dessication, or even infestations of pest or disease. It will be spring before new growth can initiate healing and regrowth. 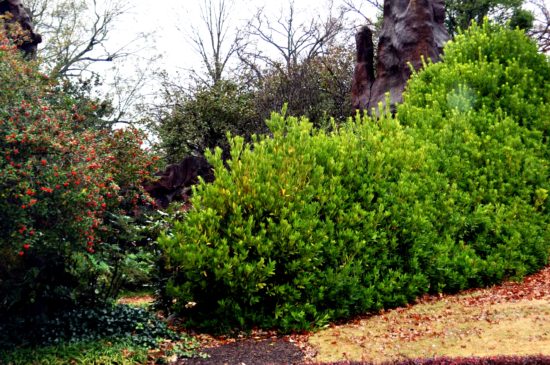 Photosynthates are stored in many parts of the plant including the stems and evergreen leaves.

A more obscure reason makes a strong physiological case. Through photosynthesis, woody plants accumulate carbohydrates that are stored in roots, but also in stems and even the leaves of evergreen plants. These starch reserves can not only play a role in winter survival, but also are mobilized and translocated as spring approaches to initiate and contribute to the new season’s growth. Fall pruning would undo much of the wonderful work your shrubs did all summer to build a better plant next year.

Other reasons to put off pruning are the benefits to wildlife. Not only might the plants have dried fruit that feed birds but they also harbor dormant insects that overwinter under leaves, in bud scales and even inside the stems. Many overwintering insectivorous birds have learned how to seek out these hidden sources of protein. Reducing the overall bulk of the plant is actually a reduction in cover as well. A dense evergreen shrub might be a cozy place out of the wind until a pruning made it less so.

Pruning is best done just as winter ends. The exception is spring flowering shrubs. Early pruning will nip off the flower buds that were set last summer. They should be pruned as soon as they have finished the bloom display.

Take note that winter’s end does not necessarily correspond with the calendar. Spring comes early some years and others years late. I look for clues in the landscape that spring is nigh. In this region, those signs may be the first rosy hues found in red maples while most trees are still decidedly gray and dormant, or the first daffodil buds pushing from the earth. Some years it it begins as early as February, though usually it is March.

Are there times to do pruning earlier in winter? If I had a lot of trees to do, say in an orchard, or a large landscape with overgrown shrubs requiring many hours of meticulous judgement, sure, I’d get an early start. Do I whack on a few plants for cut greenery for the holiday season? Like crazy I do! Tired of that overgrown shrub scratching your car door? Show it who’s boss.

Those are the exceptions, and though it seems there are always reasons to ignore best practices, for the most part don’t prune in fall (or early winter) and I saved my most heartfelt reason for last. It’s ugly. Why would anyone want to look at a shorn plant all winter? Those stems might be those that play gracefully in the winter wind, or serve as perch for a brilliant cardinal. The bleached flowers may still have lovely structure, gossamer reminders of summer glory, poised to be etched by frost or light snow.