Seeing Elizabeth’s snow photos of Buffalo made me want to share nice snow shots from MY part of the world, so here goes. We don’t get tons of snow here in the Mid-Atlantic but when we do, we photograph the hell out of it and post it all over the Internet.

So it was on local Facebook groups that I saw dozens of nice shots of the small town of Greenbelt MD, looking its prettiest, covered with varying amounts of snow.

Above is our town center, the commercial hub of the town built as a New Deal project in 1937. You can just see the marquee of the Art Deco movie theater on the right. It’s a nonprofit and offers free children’s programming on snow days, to the great relief of local parents.

Even the prettiest building in town – what’s now our Community Center – gets better looking with some snow cover and sunshine.

The town’s lake was also created as a public works project that put people to work and 80+ years later it’s still an immeasurable amenity to residents.

Add snow, ice and wildlife and you have the taking of hundreds – probably thousands – of photos by locals, seemingly all of which are posted to Facebook but hey, I found these two gems among them so I say keep ’em coming.

Now for some snow scenes in public gardens, because we have a bunch of them around here. 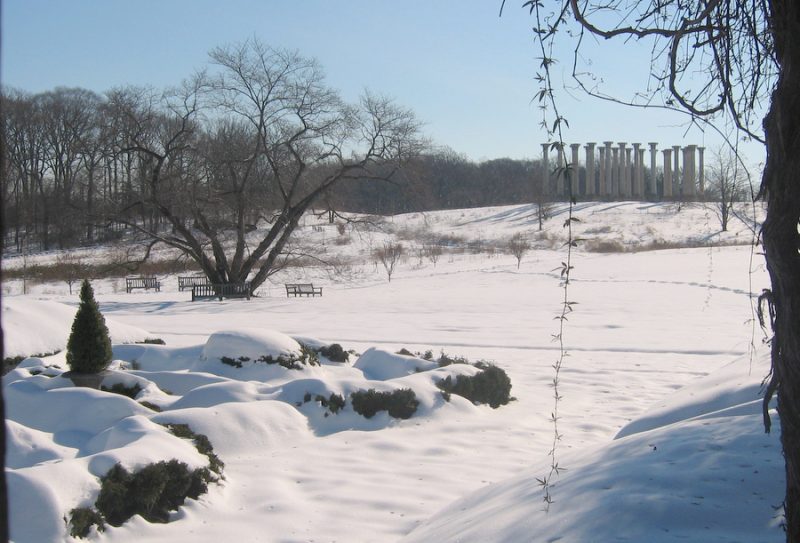 At the National Arboretum, the columns that once held up the U.S. Capitol are always photogenic. That’s a knot garden in the foreground. 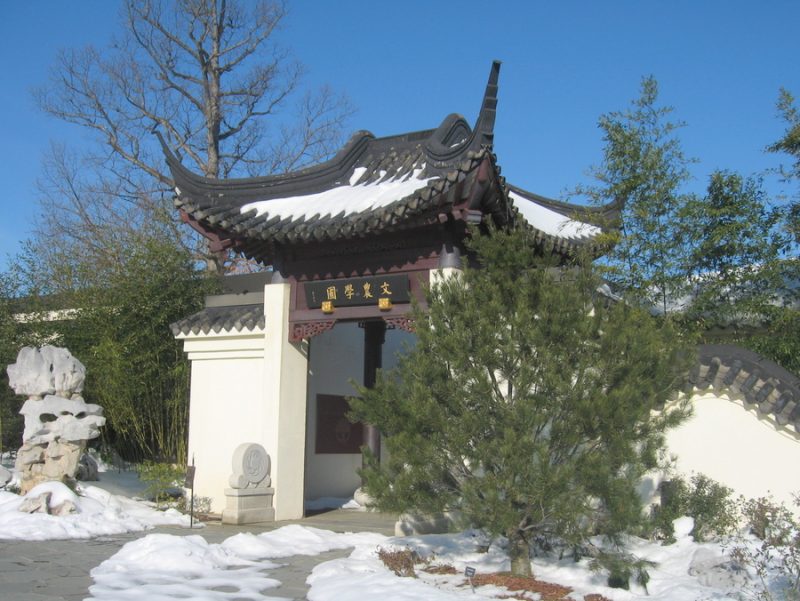 I love the entrance to the National Bonsai and Penjing Museum in the Arboretum.

During or immediately after snowstorms is exactly when I’m NOT inclined to schlep into the city to take photos of tourist sites at their winter prettiest. Fortunately, Smithsonian horticulturist James Gagliardi IS there – clearing snow and snapping photos when he can. Above he captured the Hirshhorn museum on the left and the Smithsonian Castle in the distance.

Here’s James’s photo of the serpentine Pollinator Garden that was under his care at the time. (I understand that he’s been promoted since then.)

Lastly, photographer Tom Stovall lives close enough to Meadowlark Botanic Gardens in Northern Virginia to drive there while the snow’s coming down and catch these shots.

That’s enough snow for me. I’m ready for something to BLOOM.