As spring roars in behind its exuberant parade of dogwood, redbud, magnolia and cherry trees I sit ready to praise a trio of shrubs that bring me almost as much joy without all the press: the vivid quince, the golden kerria and the oh-so-lovely pink almond, the latter often derided in highbrow horticultural circles.

The knock on all of them – somewhat justified – is they may be interesting about 10 days a year but what about the other 355 days? Well, I know a lot of people I would put in the same category.

I have no idea where I got my first quince – or why? They were purchased in that phase of gardening life during which I wanted one of everything. They all come under Chaenomeles speciosa, which is Latin for “comes in an absurd variety of colors to about ten feet tall.”

All of mine ended up along our long driveway, the ubiquitous “Welcome Home” plant that defines my gardening aesthetic. The first one up is a vivid orange; the cultivar name tag lost to history. Truth be told, I’ve lost most of my plant name tags. I almost don’t care anymore. I’m sure it’s a quince. The rest is all the quince’s secret.

The one quince I know I have for sure is ‘Dragon’s Blood.’ It’s not just red, it’s screaming in-your-face-red. Horror movie double-bloom red. In full cry, as it is right now, it is the most stunning flower on our eight acres.

Yet it doesn’t dominate the landscape. It’s a bit hidden away under a clump of huge pink and white dogwood trees, themselves somewhat worthless because after years of pruning to allow needed access underneath, their blooms are about 15 to 20 feet above the driveway.

Quince do well in full to part sun, can take some drought, and seem very willing to just disappear into the landscape once their 10 days are up. I wish I could say the same about those people I was talking about earlier. 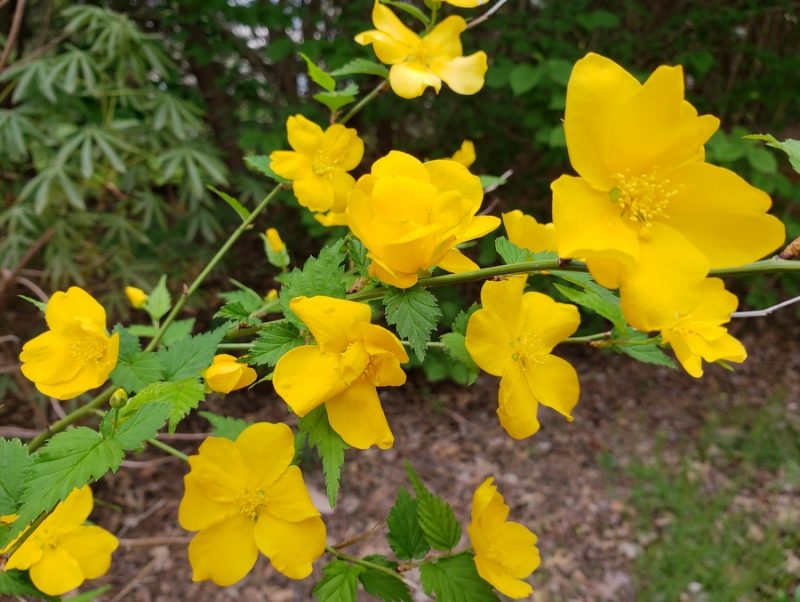 My kerria shrubs, or Kerria japonica and Japanese Rose for its Asian heritage, grow on the far side of our yard in front of our huge arborvitae hedge. Kerria, especially the double-flowering ‘Pleniflora’ and large-flowered ‘Golden Guinea,’ always belong on the far side of the yard.

What is that,” the mind asks?

Actually, kerria also come with whitish flowers and variegated leaves – but what’s the point in being a basically yellow-flowering shrub if you can’t use your given 10 days to show off?

Here’s perhaps the very best thing about the kerria: It will bloom in the shade where the flowers will stick around a little longer, maybe even 11 days and 42 minutes. How many shrubs do you have that will bloom in a fair amount of shade? Then, as with the quince, it can sort of disappear under there until next spring.

It will get a little leggy in the sun so just whack it way back after those yellow flowers are all gone. I whacked ours back last year and will not mess with it this year. I need to be surprised again next spring.

Which brings me to our dwarf flowering almond, which I believe is a Prunus grandulosa. If not, it should be. The sad truth is if this almond were a puppy it would be the last one to go from the kennel, at least when not in flower.

For 355 days a year you could not give away this plant. It is ugly, scraggly, totally ignored and forgotten, even criticized as a Dollar Store shrub, which may be doing a disservice to Dollar Stores. 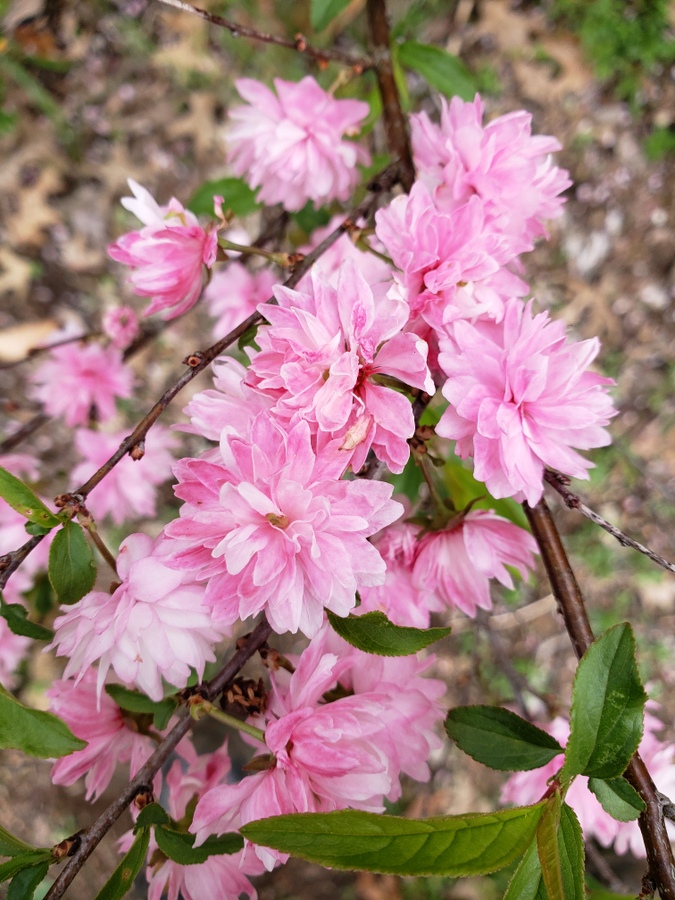 Yet please pause a moment from this text and look at the photo of this discount store shrub. Have you ever seen anything more lovely, more exquisite, more charming? Cinderella should have had it so good.

So there she is, a Cinderella planted along my gravel driveway, albeit way too close to an orange quince. But I know what’s coming. I begin looking for signs of those pink blooms in late March or early April.

Yes, there is a hint of pink bloom. Then there are a half-dozen; then a dozen. Then a Fairy Godmother shows up and Cinderella is all dressed in pink. It’s her 10 days at the ball.

Prince Charming hasn’t shown up with a glass slipper yet but – as with everything in horticulture – you gotta believe.