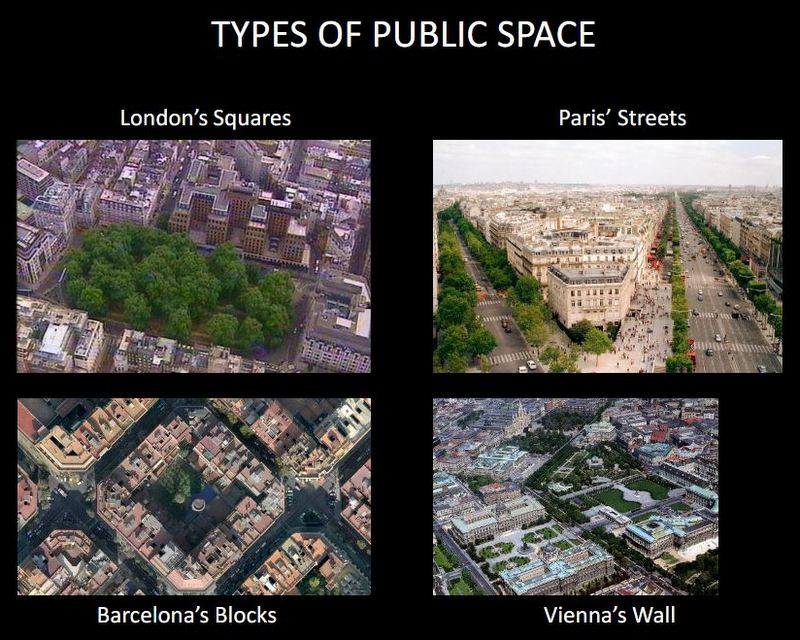 My next report from the “History of Landscape” class I’m auditing at the University of Maryland covers something that landscape architects study but is off the radar for garden bloggers and their readers – urban design. But it was my favorite lecture by our brilliant teacher Dr. Caren Yglesias, Ph.D., AIA, Affil. ASLA so here ya go!

Caren selected the iconic public spaces of London, Paris, Barcelona and Vienna to elucidate and I asked her why:

I think they are all successful, and my hope was that students realize that good urban open space does not have a single design solution, but that the places and paths can all contribute in their own ways to an ability to live in a city. 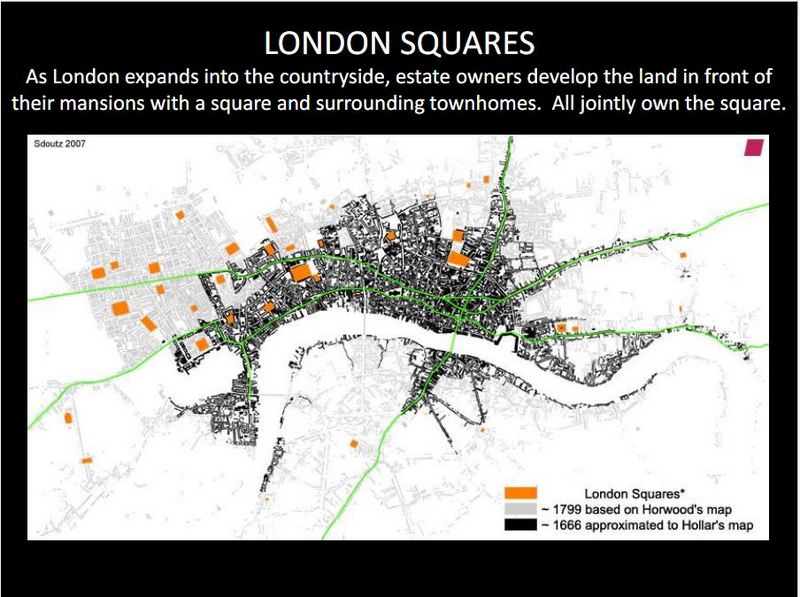 London is a city that spread outward through sprawl, thanks to infrastructure built during the Industrial Revolution that “allowed people to move away from the crowded, dirty, and disease-prone city with its polluting industries along the Thames to the healthier suburbs,” quoting Caren.

“This meant that country estate owners who saw the city moving toward them could develop the land in front of their homes as squares that were co-owned by the surrounding land owners.  These are now the London squares, cooperatively-owned with private access, but still providing air and trees to all.” 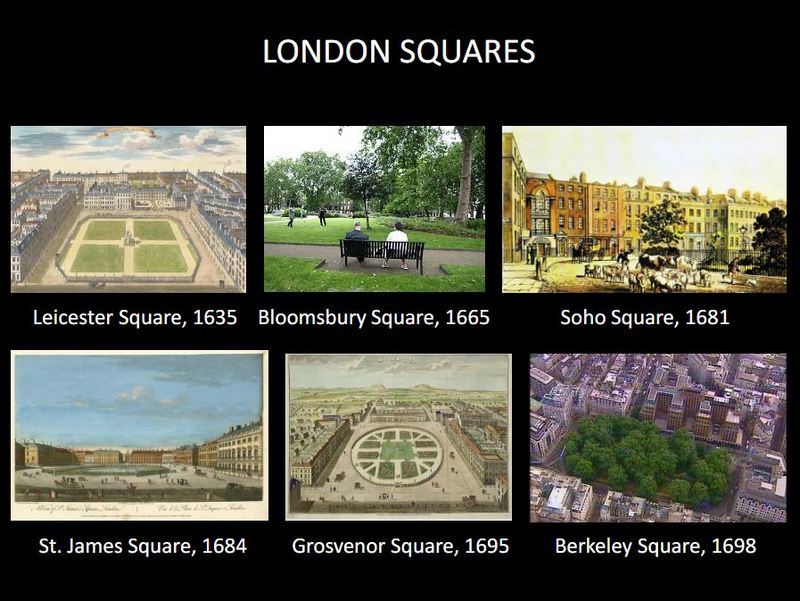 She notes that “This is similar to Bryant Park in Manhattan, which is a public park restored and maintained by a small tax on the surrounding property owners. Support by the ‘frame’ around a park, property that benefits the most by its proximity, is becoming the model for funding urban public parks.”

That’s one way for cities to have green spaces, I guess.

Wiki notes that some of the squares are known as city square because they’re mostly hardscape while others contain communal gardens and are called garden squares. “Some of these gardens are now open to the public, while others, for example around Notting Hill,  are still fenced and private.”

To peek inside these private spaces, go during the “Open Garden Squares Weekend” that takes place on the second weekend in June. In 2013 over 200 gardens took part, including the garden of the Prime Minister at 10 Downing Street. 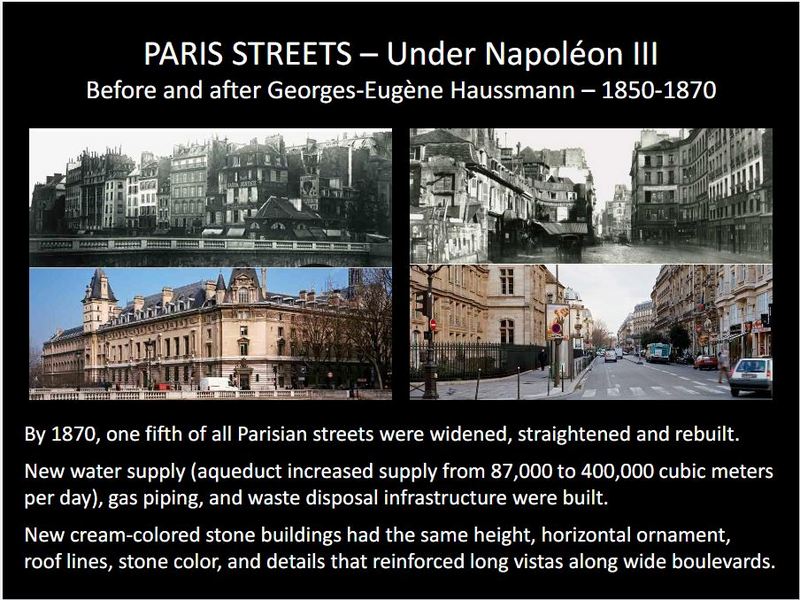 From 1853 to 1870 central Paris was transformed by a huge public works program commissioned by Emperor Napoleon III and directed by George-Eugene Haussman. It included “the demolition of medieval neighborhoods that were deemed overcrowded and unhealthy by officials at the time; the building of wide avenues; new parks and squares; the annexation of the suburbs surrounding Paris; and the construction of new sewers, fountains and aqueducts.” (Source: Wiki:) 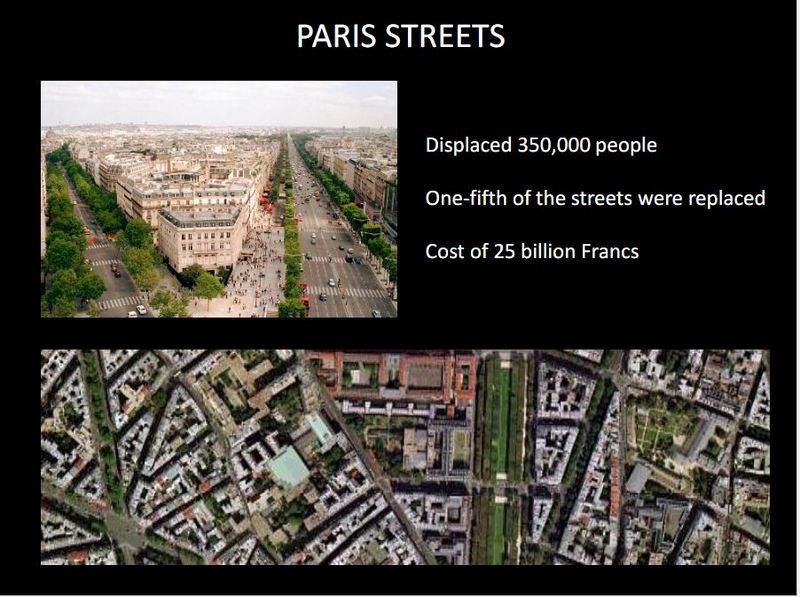 According to Caren, “All this led to Paris becoming a ‘vertical city’ with mixed commercial and residential uses, with families of varied incomes sharing the same building.” 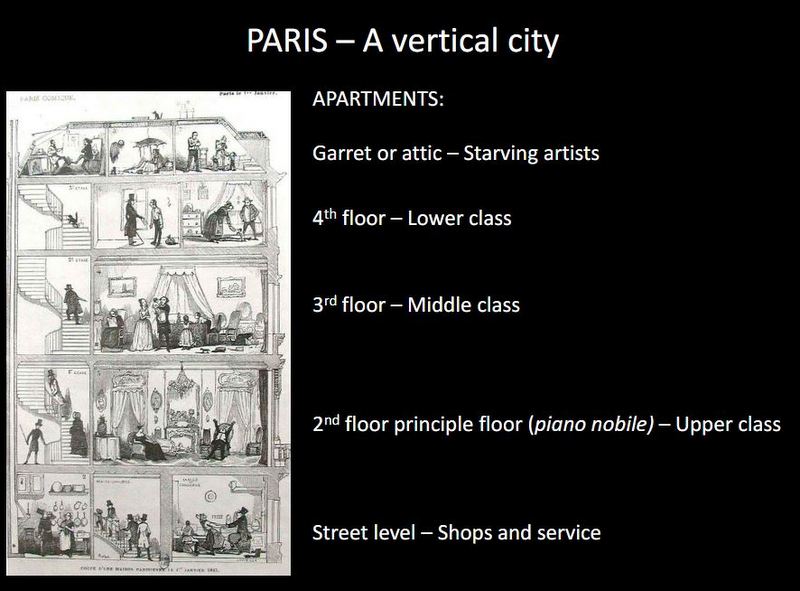 Which helped Paris grow upward in density, rather than by sprawl.

And the result obvious to even the most casual tourist was the creation of a coherent, legible look for Paris, with wide, park-like streets. (Planning matters!) 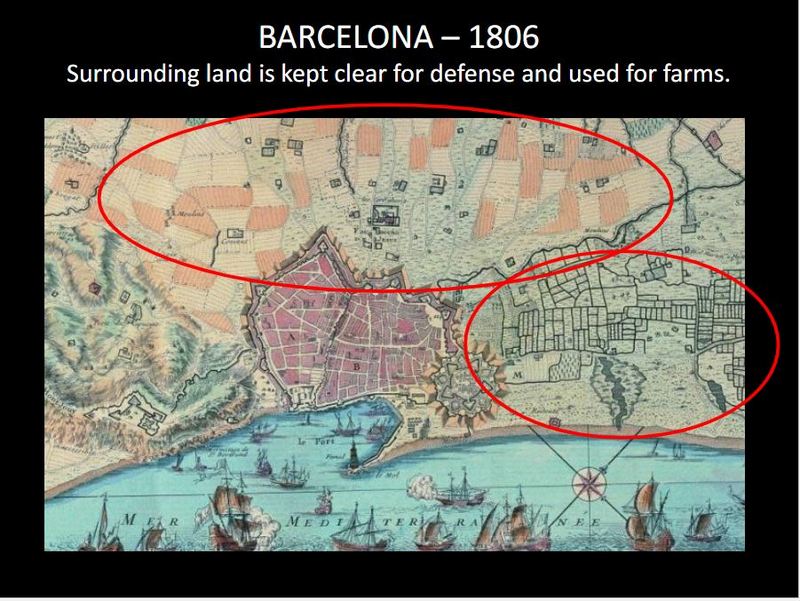 By the mid-19th Century, not only was the city center crowded but the city’s defenses against invading forces – the Medieval wall that surrounded it and the cleared plains beyond – were no longer needed. So a plan was developed to expand the city. 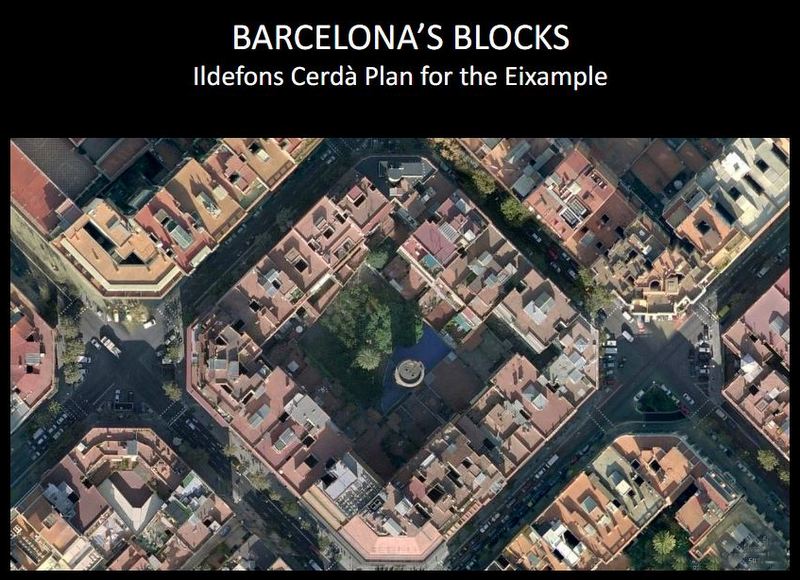 The plan by Ildefons Cerda created the Eixample District using “square blocks with courtyard interiors and canted corners at the intersections. The octagon-shaped intersections keep the public space more open with freely flowing air and the courtyards become what Lyn Lofland calls ‘parochial space.’ That is, neither private nor public, but shared by the community of each particular block. ” (Quoting Caren.) 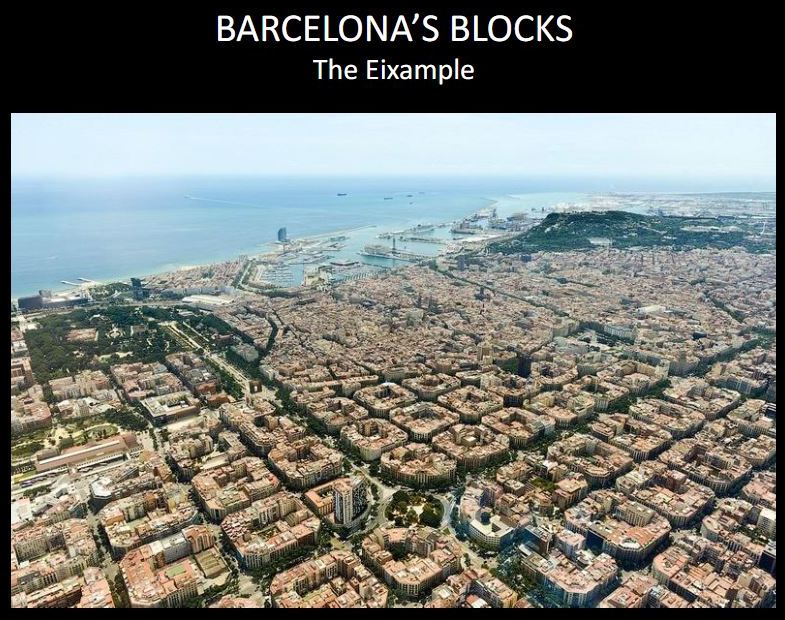 But at a site about failed architecture I see the plan called a “lost utopia.”

The majority of the blocks were soon built up on all four sides while far exceeding their originally planned height. BLocks were developed developed without regard to the plan. Later, under Franco’s regime, the blocks were further built up, resembling something more akin to Soviet block-brutalism than a greened, ventilated, publicly accessible neighborhood. In complete contrast to Cerda’s original vision, the central courtyards were often closed off and are now commonly used as a car park. 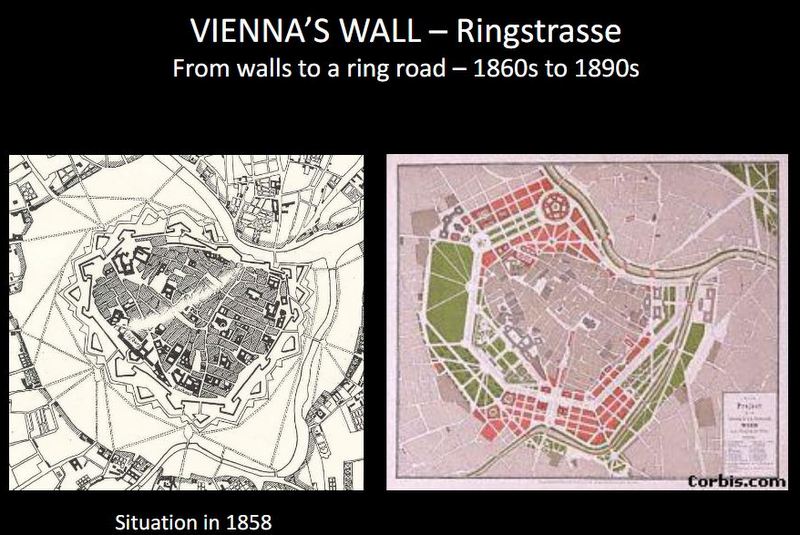 Caren writes that “Like Barcelona, late 19th century Vienna no longer needed its defensive walls, which were torn down and replaced by the Ringstrasse, a 500-meter-wide street with lanes for cars and light-rail, dedicated dual bike paths, and pedestrian sidewalks, all safely separated by generous tree planters.” 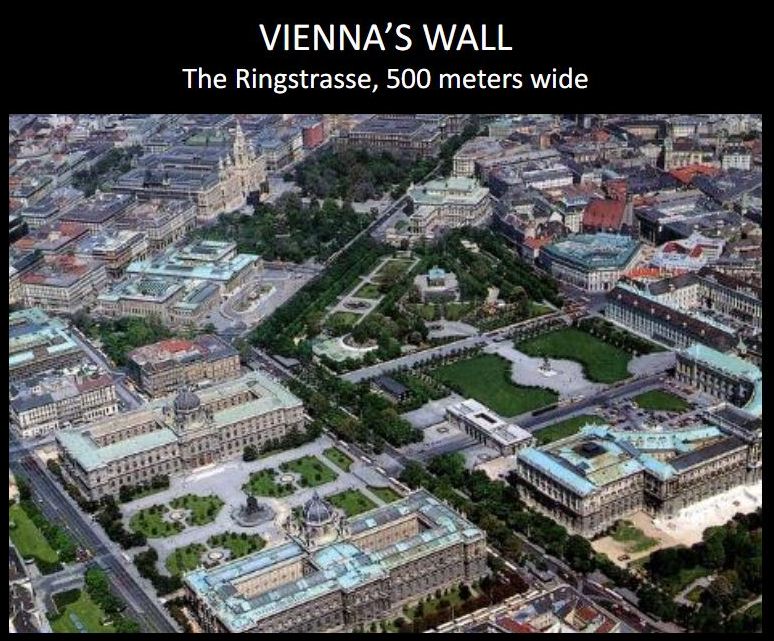 A View on Cities notes that “The boulevard is still as impressive now as it was during the twilight years of the Habsburg Empire, although heavy traffic has made it less enjoyable to walk.”

Thanks, Caren, for vastly broadening my notion of “landscape” and for making me want to visit these cities again. I’d appreciate them so much more now.