If this blog had only launched a couple of years earlier, you’d better believe we’d have ranted about the all-fake “garden” on part of the Museum of Modern Art’s roof by the famous designer Ken Smith, who teaches at the Harvard Design School. I recently learned about the “garden” from my landscape architecture professor.

This was Smith’s second scheme for the roof, after his first was rejected. He told the New York Times writer Anne Raver, “My strategy this time was to do something that would fly under the radar. Something that was subversive, but could blend in.”

And who’s it for? Raver wrote, “So museum staff will enjoy it, daily. And so will people in surrounding skyscrapers, particularly the residents of the 52-story Museum of Modern Art Tower built over the original museum.” 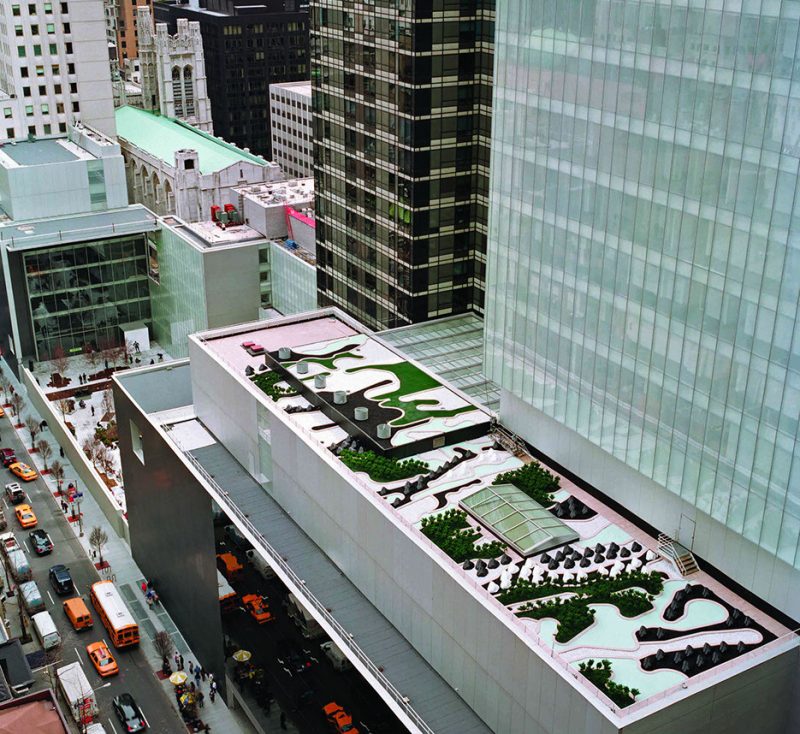 It also took two tries for the ASLA to give Smith’s design an award. Here’s what Smith wrote about the design in his second application for an award:

The garden breaks new ground esthetically in terms of design vocabulary, wit and irony, materiality and public visibility. While physically inaccessible, the garden is highly visible as a viewing garden at the urban high-rise scale of Midtown Manhattan…

The history of landscape design is filled with examples of camouflage and simulation. Central Park, for example, is a large-scale garden that artistically simulates visual and spatial aspects of an idealized pre-industrial arcadia and disguises a large territory of the Manhattan grid with a simulated nature. Contemporary landscape design often deals with the fundamental issue of ameliorating or covering up the impacts of the constructed environments.

Practitioners refer to it as “remediation,” “shrubbing it up,” “contextualization,” or simply “naturalizing.” This practice of landscaping as camouflage is a common but critically unrecognized aspect of simulation in the landscape architecture profession. In contemporary urban life camouflage is ironically used to both blend in and stand out.

And one of the ASLA jurors called it

Original–a real garden in a form that hasn’t been seen before. It’s amazingly contextual–the artificial elements really work in this setting. We love the painted grates. Graphic design at a city scale. 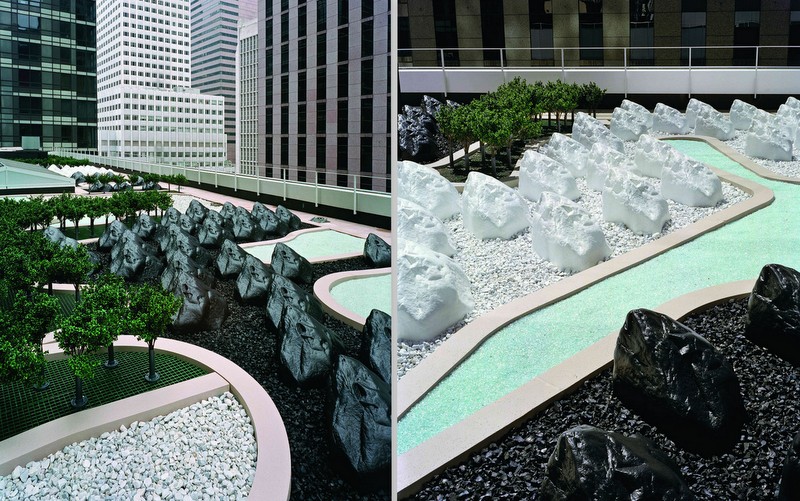 To no one’s surprise, others have disagreed. A reviewer for Treehugger wrote

No irrigation. No live plants. No maintenance. No heavy planters. 185 plastic rocks. 560 artificial boxwoods. 300 pounds of clear crushed glass. 4 tons of recycled rubber mulch. This is the “garden” on the rooftop of the new Modern Museum of Art in New York. Ken Smith is a fantastic landscape architect. But everybody makes mistakes.

See, the roof below this “garden” is over the museum’s new sixth floor gallery space; they wanted a garden, but they didn’t want any leaks. So they hired Smith to commit the crime of the century.