Who knew the life of a gardenblogger could be such a social whirlwind? Or that through blogging I’d meet and get to socialize with such interesting, accomplished people, and even feel at home with them.

The grandest of the three events I attended last weekend was the American Horticultural Society ‘s dinner to honor its 2019 book and Great American Gardener winners (shown above.)

I had asked to be seated with the sole 2019 winner I know a bit because I interviewed him once for a story about him on the Rant. That’s Dr. Gary Bachman, above with wife Katie and (far right) Sara Stine (wife of Kirk Brown, former Garden Writers president and taker of the photo). Gary won the Communications Award and to find out why, click that link to my story about him and the world of Southern Gardening media outreach he’s created as Extension educator at Mississippi State.

I soon learned that I’d be seated next to the guy who would be voted “Most Fun to be Seated Next To” by apparently everyone, and not just for his Hawaiian attire at this kinda-dressy event. (He seemed proud to have at least put on long pants for the occasion.)

Here are two more winners for communicating – in their case for writing books: Jason Dewees for “Designing with Palms” and Niki Jabbour for her “Veggie Garden Remix.”

I had met Niki briefly in – I want to say Toronto at a blogging event? This was her first visit to the DC area (she’s from Nova Scotia) and I bemoaned her lack of time to take it all in but maybe next time, for her third book award. (This was the second for Niki, and in our short chat I was impressed enough to decide to interview her for a profile here.)

Another award-winner at my table was the awesome Ira Wallace, shown above receiving her Commercial Award for founding the Southern Exposure Seed Exchange, which she cooperatively manages with other members of the Acorn Community Farm in Mineral, Virginia. Ira and I got to chat about intentional communities in Central Virginia, where my dad had a farm and where he and I once visited a commune quite famous in the ’70s – Twin Oaks.

Moving on, I attended two social events in conjunction with the annual meeting of the American Public Garden Association, which met in DC this year.

The first was also a large dinner under a tent, but the similarities end there. This one, at the National Arboretum, served pizza to hundreds of tired, sweaty public-garden staffers just off the bus from touring who knows how many gardens. The gastronomic hit of the evening was the sushi served in the Bonsai Museum.

This was their one chance to see the Arboretum, including its most prominent photo-op – the Capital Columns, which once held up the U.S. Capitol but were removed when the House and Senate wings were constructed.

Above, some APGA attendees touring the Herb Garden, with drinks in hand.

I also got to see the Arboretum’s newly installed Friendship Garden make-over. Shown here in that garden are, from left, Thomas Reiner and Claudia West of Phyto Studio, which designed the brand new garden; Adrian Higgins, garden columnist for the Washington Post; and Cherie Tripp Lejeune, president of the National Capital Area Garden Club, which funded the make-over. Adrian described the updating of the garden in this column.

Plant Peeps Open House
Last of my three-party spree was a “Plant Peeps Open House and Potluck” hosted by Claudio Vazquez and Amanda McClean, co-founders of Izel Native Plants. Izel describes itself as “a marketplace for plants native to the contiguous US. We are not a nursery.”

Above, one of several party spots in Claudio’s garden. In the center in a sling chair is Brad McKee, editor of the Landscape Architecture Magazine.

From left, Amanda (I think), Gregg Tepper, John Boggan, and Zach Pittinger speaking to me.

The highlight of this final garden party for me was the chance to mingle with people I don’t usually run across at “gardening” events – landscape architects and some architects, too. I took the opportunity to ask what they really thought of the newest memorials and landscapes in DC, about which I have a few strong opinions. To no one’s surprise. 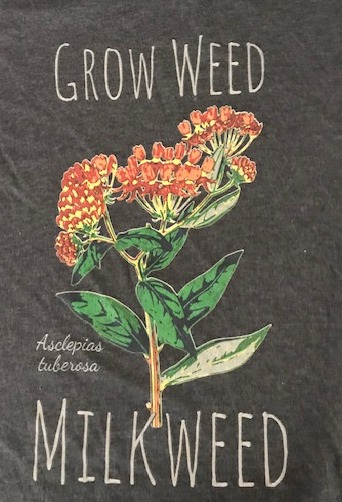 Thanks to Claudio and Amanda for hosting and kudos for their marketing savvy in giving us all fabulous T-shirts like this one I’ve worn already and gotten tons of attention for. They were offered in a selection of plants, and the fabric is to die for.

And a final shout-out to my friend Kathy Jentz for organizing these twice-yearly parties that bring garden writers together with professionals who work in DC-area public gardens.

Networking is too dry a term for the fun and connections that happen when we get together.