The National Building Museum in D.C. has a tradition of installing a “Summer Block Party” exhibit in June, and this year it’s called “Lawn.” So naturally I headed downtown to see what the evil pro-lawn forces are up to this time.

“Lawn” takes up the entire Great Hall with a humongous artificial lawn on an incline and variety of things to do on it – like rolling down that incline, playing croquet, bocce ball or dominoes, and lolling about in a swing while listening to lawn stories told by famous people like Whoopi Goldberg, Bette Midler, Venus Williams and Norman Lear. (The transcripts of the stories – “Never before told!” – are here.) 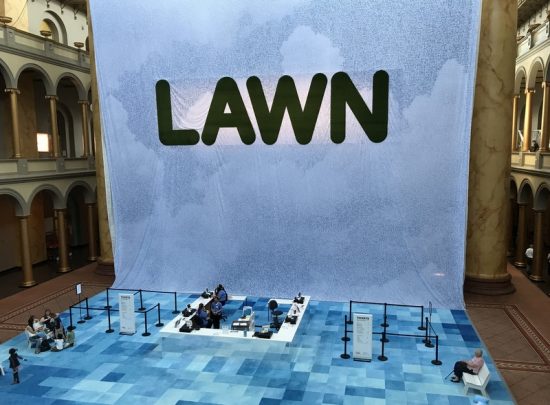 (Here’s a video of the exhibit’s installation, with its designer. And a travel photographer reviewed the exhibit in this video.)

Honestly, I had assumed that it was ChemLawn and makers of fake turfgrass who’d paid for this huge ad for their products and services, and I expected to hate it. 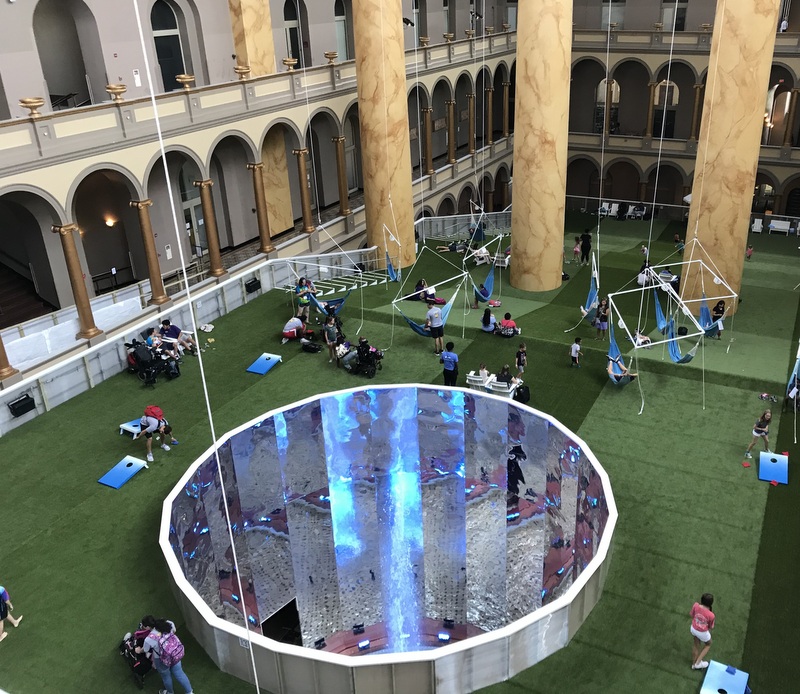 Sure enough, Synlawn, the manufacturer of the fake lawn in the exhibit, IS a sponsor, but AARP is the primary one, and ChemLawn was nowhere to be found in the credits.

But it turns out that the artificial turf used here is plant-based! So who knows: maybe an improved synthetic version will be more sustainable than the stuff we walked on as kids.

I also overcame my fear that the famous people’s stories about lawn would encourage Americans to grow even more of it. Instead, I found the stories to be charming remembrances of summers past. Their stories made me see lawn as a space for beloved outdoor activities, not as the much-maligned garden feature it is today.

But perhaps more important in changing my mind was a friend’s mention of the exhibit on Facebook. I followed up with questions and she told me that “We took 2 1/2-year-old [granddaughter] today and we had a great time. We had to go back in several times after leaving for a snack or lunch. It’s just the atmosphere that was appealing…There are speakers all around playing outdoor sounds – dogs, birds, storms etc. It’s just a fun atmosphere.” Okay, I get it!

Anyway, I’m not anti-lawn if the lawn’s being USED for something and maintained intelligently. Neither is well-known lawn activist Paul Tukey, who wrote a whole book about lawn games. Americans could use more of that.

So I’ve overruled my gardening snobbishness and recommended “Lawn” to locals as a fun place for kids. I suggested they make a day of it by combining “Lawn” with an amazing exhibit for museum-goers of all ages – the new Dinosaur Hall at the Smithsonian’s Natural History Museum.

I won’t repeat here my rave review of the Dinosaur Hall but for gardening readers I’ll mention someone I ran into when I visited – Amy Bolton, chair of the American Horticultural Society’s board of directors. Her impressive day job includes being the “lead educator” for this exhibit, which has so much to teach us about climate science, evolution, and our shared “humanity” with other animals that I’ll need several visits to take it all in. .