The curcuma plants were in black, plastic three-gallon containers near the entrance to a local box store, and not too far from kitchen sinks and plumbing supplies. They were in the final autumnal stages of flower, a faded pinkish-purple that indicated something a whole lot more lovely in vibrant youth.

This was last fall. I stopped and looked, circled the plants, reading an inadequate label. “Curcuma” it said, and offered little else other than a name that was fun to pronounce: “Ker-cum-ma.” I made a quick check of it on my cell phone, bought three containers – at half price – and headed home for more necessary research.

Truth be told, I often haunt the garden area of box stores, always somewhat amazed to find a clerk who actually knows a lot about plants, even at $8.95 an hour. Those folks are destined to be successful in life – or already have been.

Some of that haunting of box stores is about affordability; people who worked for newspapers for 40 years don’t spend a lot of time buying one-gallon perennials for $21.95 when the $12.95 are in town, albeit often in “cheater” gallons.

Some of it is timing; box stores seem to be unloading their truck loads of stuff about 20 minutes after Christmas and when spring fever hits, there they are. 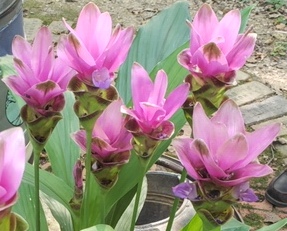 It’s also a matter of being able to see what plants look like in bloom weeks and months before they should be blooming in your yard. Most box store plants have been grown in greenhouses. Box store customers are mostly crazy to buy them in bloom because then they will lose a lot of the natural bloom in their ground. On the other hand, it’s an early education to buy the already-blooming mums in September.

So fess up: How many of you alleged garden experts, media gods, nursery owners, wealthy patrons, subscribers to Fine Gardening, Horticulture, The English Garden and Gun & Garden, customers of Brent and Becky’s Bulbs and Plant Delights Nursery, frequent visitors to Chanticleer Garden, Missouri Botanical Garden and Butchart Garden, have found yourselves shopping the plant-littered aisles of some local box store obsessively searching for something a little different, new or maybe even better?

There you go in raincoat, floppy hat and sunglasses, head down and in mortal fear of being recognized, when comes the question:

“Sam The Garden Guy, what the hell are you doing here?”

Well here I was, unashamedly shopping for whatever looked new, good or cheap. I do often hit three or four favorite box stores along with several family-owned nurseries, and there were those three-gallon containers of curcuma, which I have never seen in a local general nursery. 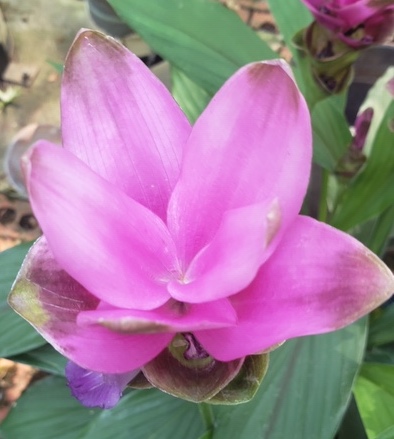 My first real research was somewhat syllable-intense. Curcuma is a genus of about 100 accepted species in the family Zingiberaceae that contains such species as turmeric, the health supplement, and Siam Tulip. They are native to Southeast Asia, southern China, the Indian Subcontinent, New Guinea and northern Australia.

Back home again in Indiana – which is not quite tropical although this summer’s record heat has it headed in that direction – I kept my curcuma in well-watered containers until actual frost showed up, cut them back and stuck the rhizomes in peat moss in a big bin in our 50-degree basement.

I remember those rhizomes being thick and matted and I didn’t mess much with them; let sleeping rhizomes lie. I watered occasionally over winter, hauled them back out into daylight after…. repeat after me…. all danger of frost had passed…and planted them in big blue ceramic pots to await further development.

My research indicated curcuma like a few hours of sun or high open shade, rich soil, regular watering and Indiana basketball – I just added the latter to see if you were still reading.

I did wait and wait all through May and June as not much happened with my curcuma, but it was obviously too late to return them to the box store. The good news was our wet spring weather brought monsoon conditions which must have made the plants feel right at home.

Then came our summer drought, which, with regular watering, still made the curcuma feel right at home. Somewhere about late August into September came the growth that made me begin to feel my half-price bargain was paying off in full.

Then came those full, late-summer, purple-pink blooms – which have lasted for weeks – and those curcuma pots began to stop traffic. As an added bonus, their leaves have remained clean and green and wholesome,

I am now hoping for a late frost this year – like next April – so I can maintain bragging rights on this beauty. The good news is the rhizomes spread so quickly I may have six pots of curcuma next year, which will allow more reason to hunt up another winner in the box stores.