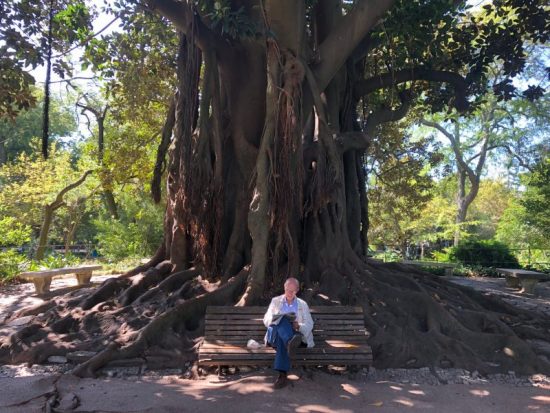 My mind was made up 43 years ago after a week filled with cheap vino tinto, emotional Fado music and lots of walking up and down steep hills in Lisbon. In a park, off the busy, beaten path, I found an inspiration for a horticultural career. The Jardim da Estrela was my guiding star. I professed solemn vows in 1976: I would love parks and gardens forever.

Before I arrived in Portugal I had traveled on the cheap across the United Kingdom, Holland, France and Spain. Dog-eared pages of Arthur Frommer’s travel guide led me to abundant parks and gardens.

On my visit to Portugal, as a 24-year-old, I was unsure what would happen after I plowed through my travel budget. I was a college graduate with a sociology degree and no certain career path. I had spent happy months beforehand, working the end of a spade at the great Hillenmeyer Nurseries in Lexington, Kentucky. Digging soil paid a little and was more satisfying than trying to make sense of Émile Durkeim.

A round trip plane ticket and a Eurail Pass would be the best investments of my life.

Fifteen years ago, I gave my travel journal from that year, with no redactions, to my traveler-daughter.

I borrowed the journal back last month and enjoyed rereading my account. During three months of traveling in the late fall of 1975 and winter of 1976, mostly by myself, there were moments of joy, wasted nights and confessional passages of lonely days, but nothing that required absolution.

1976 was a crucial period in Portugal. The 1974 Carnation Revolution marked the beginning of a messy political and economic transition from a dictatorship to a Democracy. During this time, Angolans were granted independence, and an estimated 250,000 Portuguese fled Angola and returned home.

The chaos in Portugal scared off tourists, but it didn’t scare me. I was naive and lucky. The Portuguese were gracious to this skinny, bearded wanderer.

I arrived in Lisbon in February 1976. I left the train station and started climbing up the hill. My backpack felt like I was dragging a tractor tire. A street merchant took pity. He put me on a bus to a boarding house in the Estrela neighborhood. It was bedbug-free, comfortable and cheap. The rooms slept four or five. My roommates were neither grifters nor adrift. They were searchers for something exciting that wasn’t yet clear. So was I.

The Basilica da Estrela was the centerpiece of the neighborhood. The Jardim da Estrela, the size of a city block, was the neutral ground. Everyone was welcome. The park was humble, nowhere close to London’s Hyde Park or Luxembourg Gardens in Paris, but bold enough to call itself a garden. I found a comfortable home away from home in Lisbon. People-watching was an interest of mine.  I spent hours here each day for four or five days.

It had been the dead of winter on my first visit, and I had barely begun scratching the surface of plants and gardens.

I had a different vantage on my second visit. My career as a nurseryman and seedsman was in the rearview mirror now.

I returned to the Jardim da Estrela late last month. I had a lovely reunion, though my three hours there seemed a little surreal. 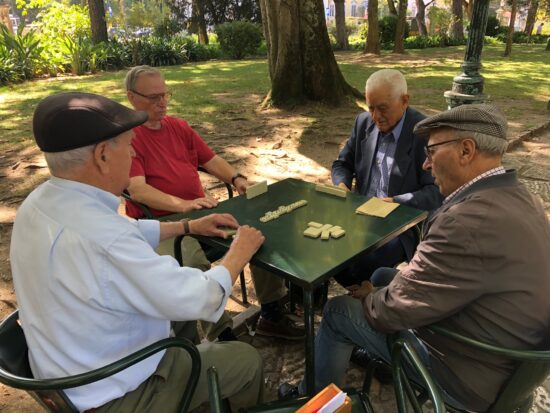 It was early autumn.

I had 43 years of catching up to do in only a few hours.

A teenager with green-dyed hair walked purposefully through the park, while old men and women, who came by their gray hair naturally, poked along leaning on canes, past a table of men shuffling dominoes at the outdoor cafe.

Picnickers and sunbathers staked out the grass.

Bodybuilders pumped it up. 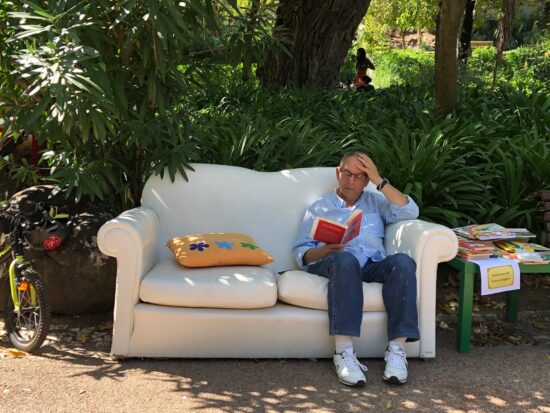 Halfway across the park, children watched a puppet show while two kids, in a play area nearby, learned how to walk on stilts. A few paces away was an open-air, free public library.

A scout group of girls and boys with backpacks and whittled walking sticks marched through the park in loose formation, past the statue of a gardener, wielding a hoe that looked heavy enough to chop sugar cane.

The sculpted gardener’s real-life successors knew how to take care of the Jardim da Estrela. The plantings were neatly tended. There was little trash, and the only vandals were easy to identify. They’d carved their names on thick curved, spiny leaves of giant agaves. Mona and Stefi were here. So were Jenean, Stella, Vesma, Andre, Amark, Leo and Silvia.

The thorny kapok tree, of rainforests, was in bloom. (Frost is rare in Lisbon.) I caught a distinct whiff of marijuana but couldn’t detect the malodorous smell of the pink blooms of Ceiba peltandra. They were too high in the tree for me to reach. The fallen blooms had no scent.

Ginkgoes, palms, philodendrons and southern magnolias mingled with one another. A bird perched high in a 100’ tall Norfolk Island pine looked down on a crooked cylindrical cactus and pockets of blue plumbago and the South African lion’s ear, Leonotis leonurus.

I was happy to see a ground cover of evergreen rhodeas. I grow the sacred lily in the shade of a saucer magnolia at home in Salvisa. I wish some clever breeder would come up with a cultivar that has a fruit stalk with bright red mature berries growing above the foliage, instead of the winterberries staying hidden in the thicket of dark green, strap-shaped leaves. Wouldn’t a yellow-berried form of Rhodea japonica be nice?

I could not identify a fascinating, shade tree with a trunk that looked like it had suffered a melt down. I was told it was bela sombra (nice shadow). The hanging clusters of green berries, high in the tree, looked familiar, but I would never have guessed Phytolacca dioica, a woody South American relative of our native pokeberry. I posted a photo of the immature berries, to try to stump the chumps on the Facebook page Plant Idents. It took 15 minutes before someone got it right.

A newly married couple crossed the street from the Basilica de Estrela to have their wedding photos taken in the park. Their hopes and dreams were consummated for the family album under the big banyan tree. 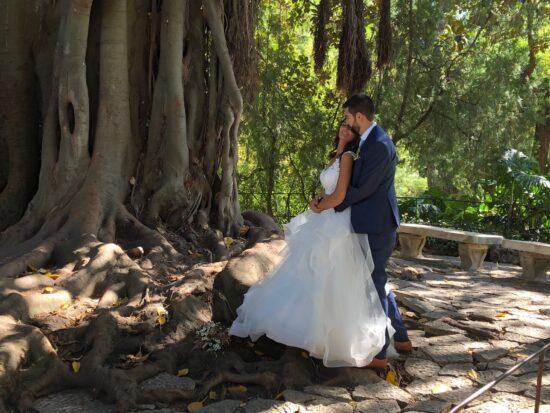 Organizers for the Partido Inciciativa Liberal were busy, 50 feet away, setting up a rally for Portuguese parliamentary election. Cold beer was waiting in coolers for thirsty, prospective voters. “Cool Operator” played on a loudspeaker in the background.

An earnest, young woman stopped by to invite me to a guided mediation group. She said it might improve my body, heart and soul.

I was tempted by the suggestion but needed at the moment to tend to my sweet tooth. 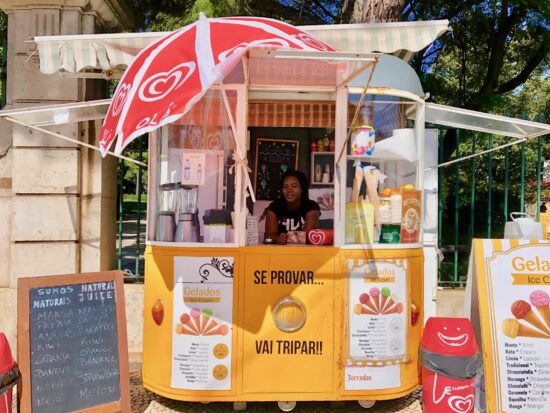 So did the Jardim da Estrela.

I smiled and thanked the nice woman for the gelato.

She smiled back and said, “Thank you for coming to the park today.”