I’ve rarely been as deeply affected emotionally as I was this fall when I attended a pair of demonstrations by young people — teenagers and pre-teens  – calling for climate action.  These young people want a future they can believe in, and I couldn’t help feeling they deserve it.  But how do you reach the powerful faction of adults that has so far stymied the taking of corrective steps? 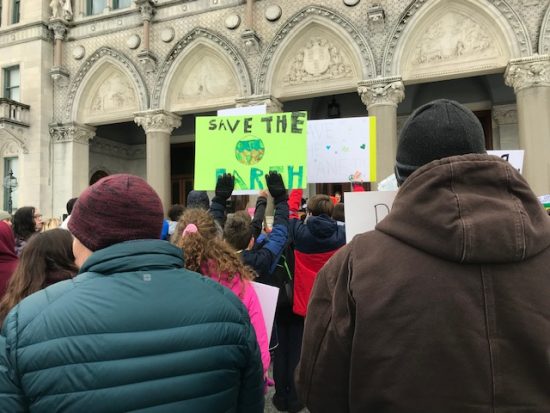 This may be where gardening comes in.

One difficulty I’ve encountered in trying to speak to those who doubt the need for or the feasibility of action against climate change has been the politicization of our vocabulary.  Those on the right bridle at the mere sound of such words as “environment” or “global warming”.  These conservatives, often well-meaning and intelligent people, associate such language with their political opponents, and commonly stop listening as soon as they hear those words.

We need a different, less antagonizing, means of communication.

One person who has worked successfully along these lines is  Dominique Browning, who was the editor-in-chief when I was a columnist at House & Garden.  Dominique has since founded and now directs an organization called “Moms Clean Air Force”.  Dedicated to combatting air pollution and fighting for children’s health, it boasts a million members, a large number of them, Dominique told me not long ago, in deep red states.  After all, when you ask a parent if they want their children to breathe clean air, of course they say yes. Having connected over that, it’s easy – inescapable, almost — to move on to a dispassionate discussion about the dangers that greenhouse gases pose to those same children.

Gardening, I believe, can and should serve a similar function.  Gardening is an apolitical activity, as popular in red states as blue, yet one that you cannot pursue without soon learning about the importance of respecting natural systems.

I remember how forcefully I was taught this by a rose garden I took care of as part of my first horticultural job 45 years ago.  Following the common wisdom of the time, I applied synthetic fertilizers monthly through the growing season and I sprayed those roses weekly with a broad-spectrum insecticide and a fungicide.  Indeed, my roses grew vigorously and remained insect and black spot free.  But within a couple of years, the soil in the garden, initially a fertile loam, had collapsed into a dense and barren clay.

That brought home to me in a way I could not ignore that a garden is a living complex, and that there were consequences to treating it as a mere chemistry experiment.

Sharing is intrinsic to gardening.  We all need to make a consciousness effort to share with others not only its pleasures but also its lessons.  Whether you are a garden club member, garden coach, or the passionate gardener in your neighborhood, I believe that you should be a leader.  I’d love to hear ideas from readers, especially those in red states, about how they think this could play out.