Rose and I stared out the kitchen window, last month, while fat robins feasted on our deciduous hollies and a glorious evergreen 40-foot American holly. Once the berries were picked clean, the robins hung around for a few hours. They splashed around the cement pond and crapped all over the place.

I am accustomed to the berry heist but wish the greedy robins would hold off until after Christmas and go crap somewhere else. Cut branches make beautiful Christmas   decorations, but you’d better harvest them before mid-December. Rose and I weren’t bothered too much as a week later we flew to Hawaii. We left the day before the winter solstice so we could enjoy Mele Kalikimaka (Merry Christmas) with Molly, Story and our longtime friends who live there.

Rose and I traded gray skies in Kentucky for lashing rain and 40 mph, winter solstice trade winds that swept the windward side of Oahu the day after we arrived. 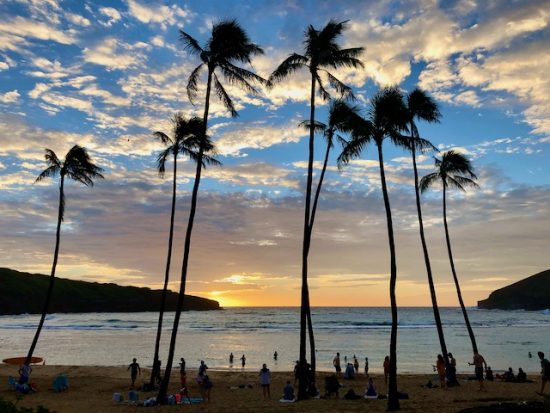 Two days later we made the short drive from Kailua to beautiful Hanauma Bay, beating the crowds to watch a spectacular sunrise. We staked out a spot on the beach, threw down towels and put on snorkel gear. We saw colorful tropical fish with Hawaiian names that you’ll need practice to pronounce.  I’m working on “Humuhumunukunukuapua” or Humumumu for short. Reef triggerfish might be a little easier.

I felt so lucky to be back on Oahu.

Few places are so culturally diverse and mean so much to me as Hawaii. Kentucky and Hawaii are a world apart. I grew up in segregated Louisville. Then, in 1971, in my early 20s, I worked as a hotel janitor in Waikiki with Hawaiians, Filipinos, Chinese and Portuguese.

I spent two summers on Oahu with a dozen or more college buddies. We held jobs, shared rent in cramped quarters, snorkeled at Hanauma Bay and body surfed at Makapu’u and Pounders on days off. We remain close friends almost 50 winter solstices later, in spite of the 4,000 miles that separate a few of us. (We all came back to Kentucky, eventually, but Roby, Andrea and Toni grew homesick. They returned to Hawaii, settled down, worked hard, raised families and went to the beach.)

Hawaiian tourism has exploded since 1971. You can’t hide beautiful natural places for long. The roads and beaches are now crowded. My favorite beaches are still lovely, even though thin meandering lines, made of small fragments of multi-colored plastic and styrofoam, occasionally wash up on shore with mangrove seeds, marking each high tide.

The tropical Hawaiian flowers and foliage made an impact on me, more than I realized in 1971. I couldn’t tell the difference, back then, between a magnolia and a mango. Nor a paw paw from a plumeria. I can now identify a few tropical plants. I know hardier Kentucky natives better than I do Hawaiian natives, but I am deeply curious about botany, and ethnic cultures, wherever I go. Hawaii, so lush and green, awakened me in many ways. I’m not sure I would have had a career in horticulture if I hadn’t absorbed a little bit of the Hawaiian tropics and culture way back when.

Rose and I returned home to Kentucky before the New Year and transitioned from palms to pines.

I needed to remind myself that I am the beneficiary of one extra minute of life-affirming January daylight in Kentucky with every rotation of the earth. Though I barely noticed the bonus smidge of sunlight, I did notice a few runway lights to spring, in the midst of the muted grays and browns of tree bark and meadow grasses. I can’t imagine a sedge will light your winter fire, not like the snow-white blooms of Christmas rose (Helleborus niger) or the fragrant yellow flowers of a Chinese witch hazel (Hamamelis mollis ‘Wisley Supreme’). These surprised me when I can home, blooming weeks ahead of time.

A string of 60 F days, while we were away, were responsible for the early flowering. However, neither eased my temperate reentry as much as the durable and semi-evergreen, shade-loving seersucker sedge. Carex plantaginea, native to the eastern Kentucky Appalachian Mountains and much of eastern North America, immediately caught my eye on a walk around the garden. I had seen one of her kin in tropical Hawaii only a few days before.

I was not expecting to meet Carex wahuensis, or any carex, in the native plant garden at the fabulous Bishop Museum in Honolulu. I knew nothing about the Oahu sedge. I was suddenly smitten. I know you’re thinking jet lag had rattled my brain on the long plane ride home. All the beautiful tropical plants like candlenut (Aleurites molluccanus) or Indian mulberry (Morinda citrifolia) to write home about, and I fall in love with a native Hawaiian as dull as dirt?

Now, when I make a lap around the garden, or wander around Kentucky’s woodlands, and run into the native seersucker sedge, I will remember fondly our celebration of Mele Kalikimaka with family, friends and the Oahu sedge.