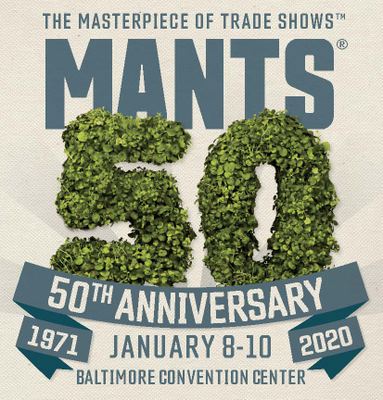 GardenRant has covered the Mid-Atlantic Nursery Trade Show several times, and I hope readers are ready for more because two Ranters attended this year, the show’s 50th!

For me the show started Wednesday night with a boozy meet-and-greet of garden writers in the lobby of the historic Lord Baltimore Hotel. I could show you photographic evidence of the general debauchery, using shots I’ve seen on Facebook, but in deference to people’s careers and marriages, I demurred. The empty lobby will have to do.

They were looking even rowdier the next morning at the MANTS breakfast for media.

You won’t see me in this shot – I’d already left to hit the floor of the Convention Center, a task I hoped to finish before lunch, by speed-walking past the almost 1,000 exhibitors. It helped that so few of them are growers or suppliers for growers and not interesting to me. That’s the nature of trade shows – they’re not for the public. 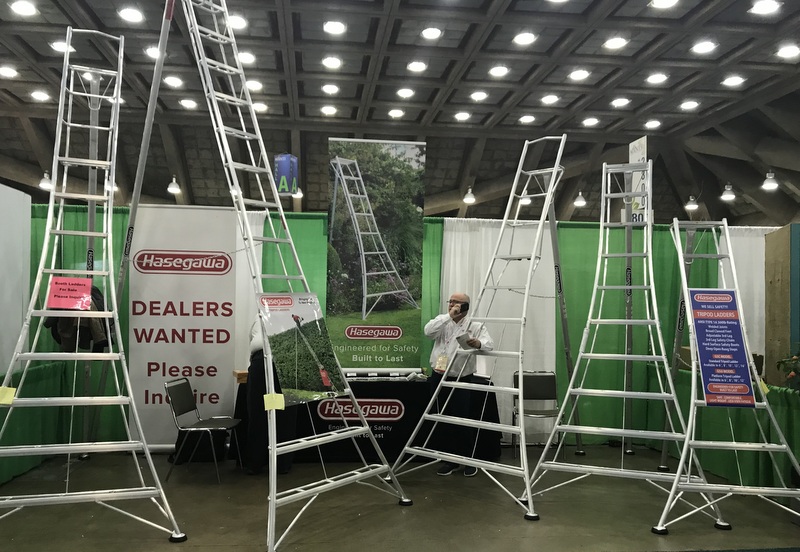 (Unless I’m way off-base and you want to know more about things like arborists’ ladders?) 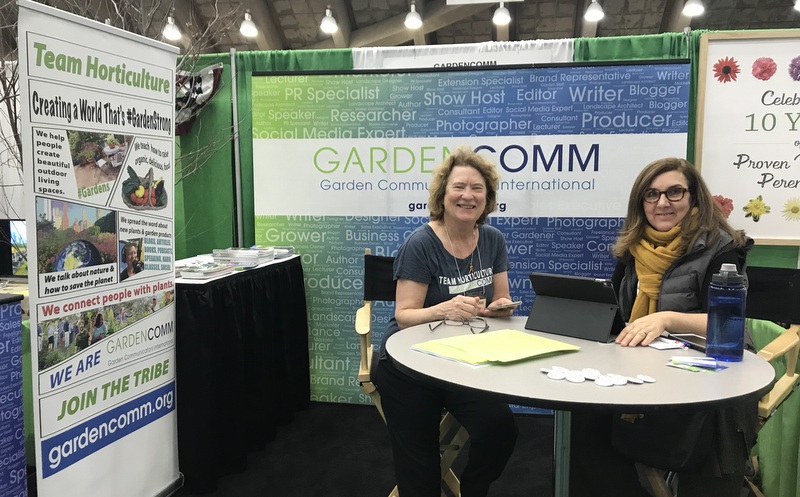 One booth I stopped for was Garden Comm (formerly Garden Writers), where C.L. Fornari was spreading the good word with someone whose name I didn’t catch.

At the hotel event I’d heard a member asking C.L. for podcasting advice. Her “Plantrama” podcast with Ellen Zachos is doing very well – check it out. 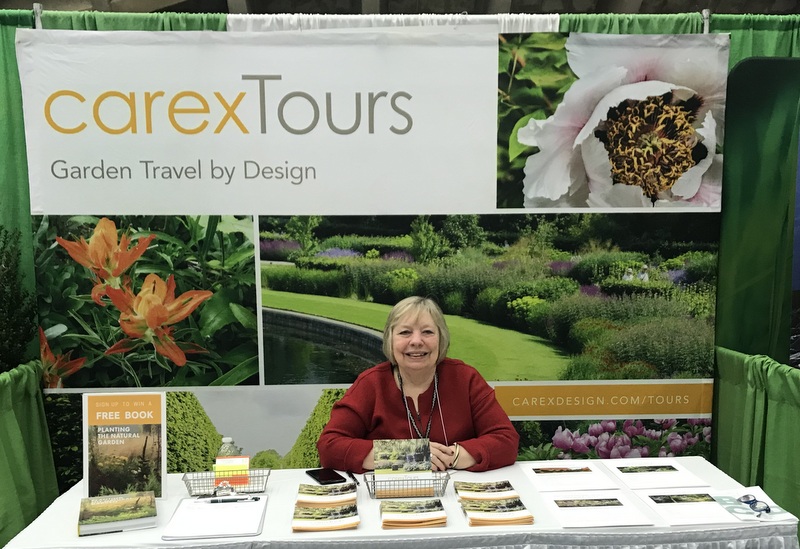 Carolyn Mullet has stopped designing gardens and now works exclusively on European garden tours (with a focus on good design) and writing about well-designed gardens throughout Europe. (Her Timber Press book is coming out this fall). 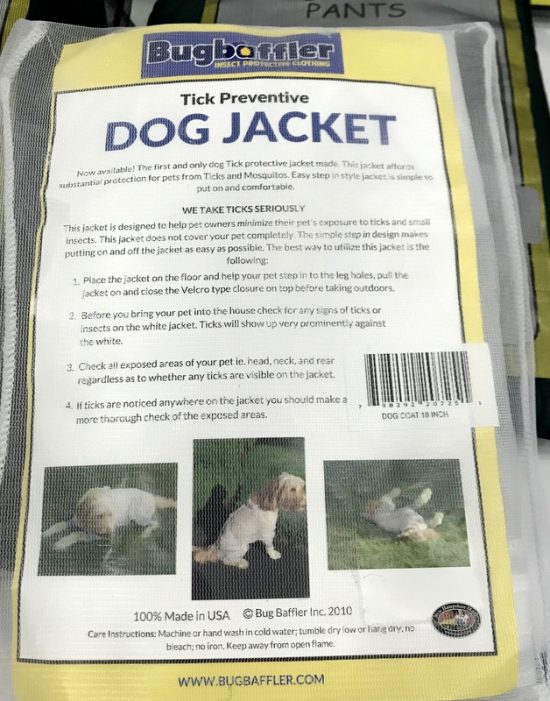 Insect protection from Bugbaffler caught my eye because the fabric alone is a tight enough weave to “baffle” the bugs without the use of chemicals! On the right above is the sleeve they recommend using with a good leather glove.

There’s even protective clothes for dogs. (Just thinking about a dog romping through the brush and then coming inside my house makes me glad I have cats – indoor ones.) 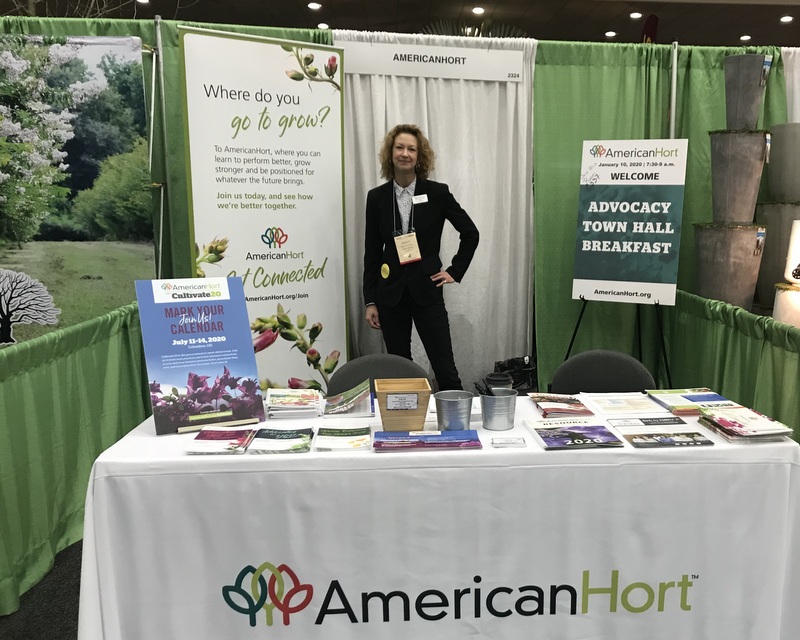 At the AmericanHort booth I got to meet one of the famous Garden Professors – Holly Scoggins, Ph.D., recently retired from Va. Tech and now director of educational programs for the organization. Good hire! 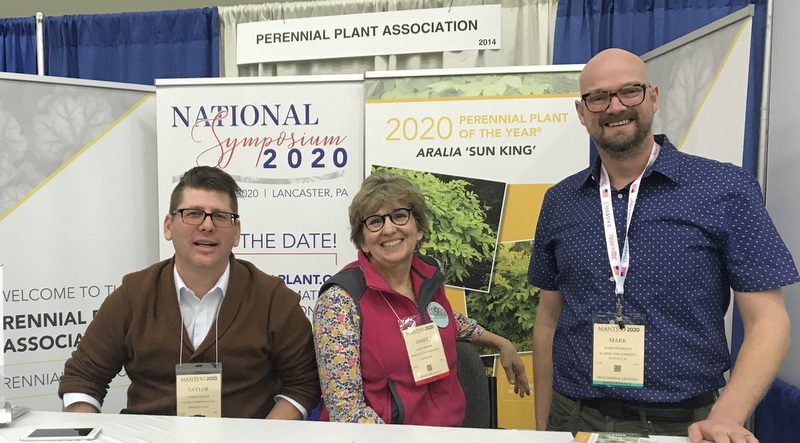 Janet’s such a good salesperson, she may have talked me into attending TWO of their conferences this year – the national in Lancaster PA and regional in Baltimore. Having loved every PPA event I’ve ever attended, I guess I’m an easy sell. 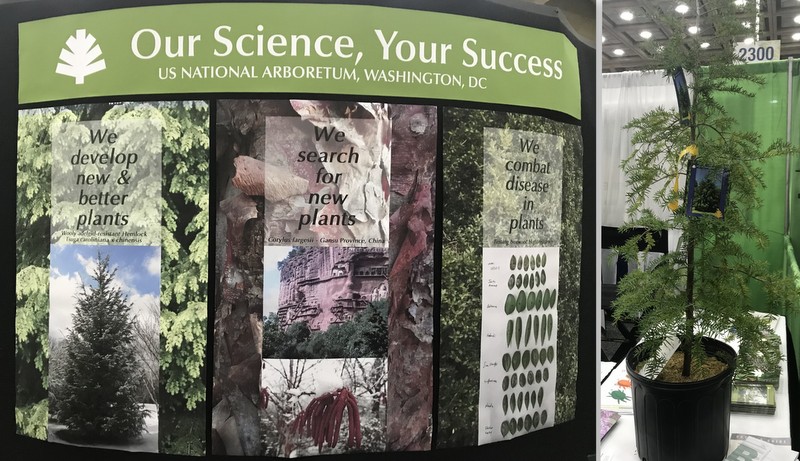 The National Arboretum was showing off its introduction of a Woolly Adelgid-resistant hemlock. Named Tsuga ‘Traveler’ (T. chinensis x caroliniana), now patent-pending after 20 years of evaluation. I’m told its “expected release” is roughly 2020-2021, because you can never tell with the Patent Office. 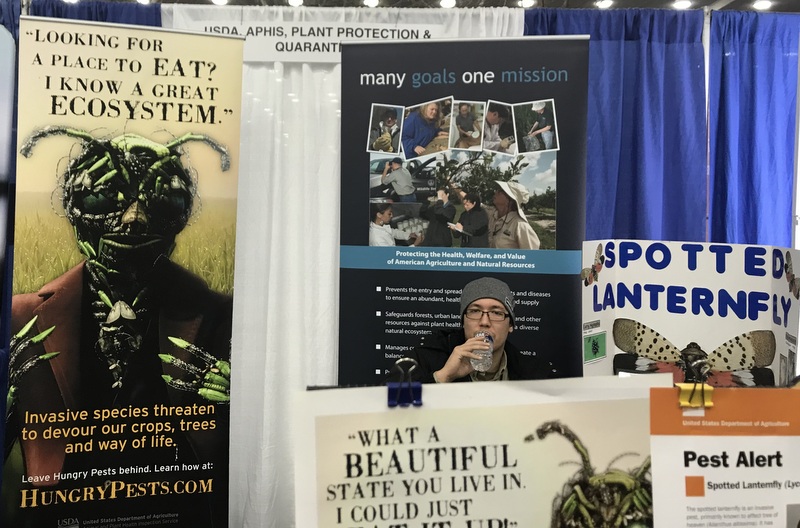 The USDA booth presented a somewhat less hopeful face, though I suppose that poster for HungryPests.com is appropriately uninviting. I was morbidly drawn to it and went to the site in hopes of vivid images to share here but the link didn’t work.

I stopped by the Organic Mechanics booth to ask Mark Highland what’s up and he showed me two exciting developments – insect poop fertilizer, and the new “Rodale Institute Approved” label on their popular potting soil bag. It confers so much authority that some chain stores are stocking stock all such labeled products. So congrats to Mark! 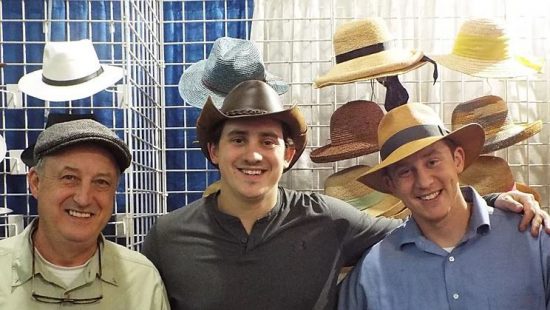 Personally, this hat company was my big find of the day. That’s because as my haircuts have grown increasingly short, my interest in hats has also grown. Some of their hats are for gardening, but most are not (need a fascinator?) and they’re all affordable. (I shopped for hats on a recent trip to Nashville, where prices started at about $130!)

After speed-walking through the show, I joined a bunch of GardenComm members for lunch and once again, the cameras didn’t come out to record the event until after I’d left. Is it me? 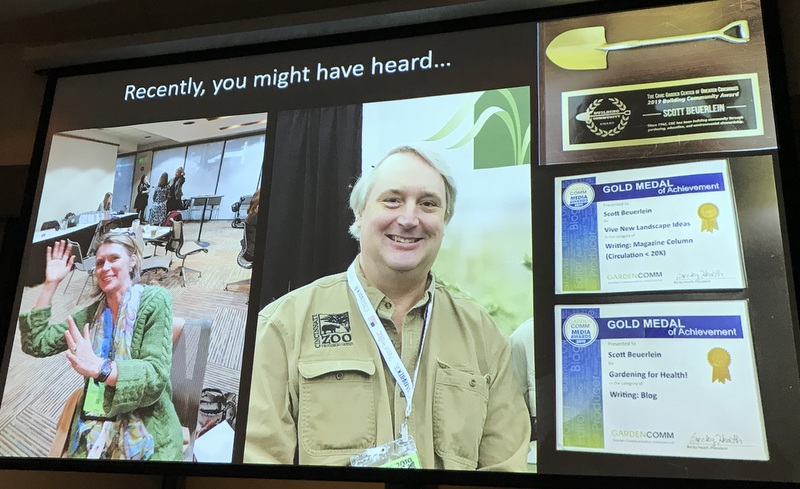 MANTS-related events continued after the show ended, and there was one that I wouldn’t have missed for anything – GardenRant’s own Scott Beuerlein’s terrific talk to the Four Seasons Garden Club, a rousing call for planting more plants. What brought him to the club’s attention was his on-going “feud” with local writer Marianne Willburn. 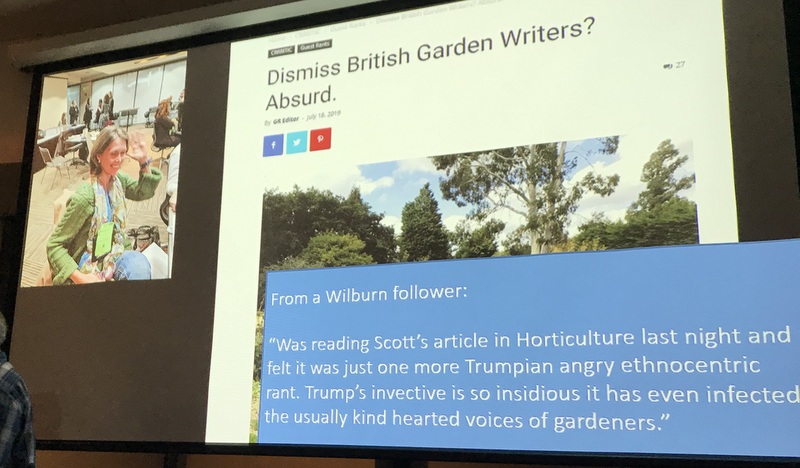 This is the guest rant that started it all. Somehow I missed the comment by a “Willburn follower,” calling Scott “Trumpian.” Hilarious!

Also hilarious? Scott’s talk!! And Scott himself. I’m so glad he joined us as a regular here on the Rant. 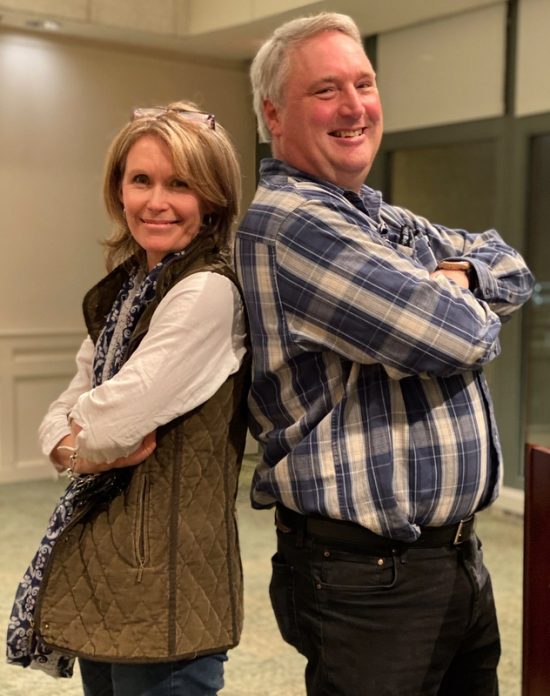 Marianne sat quietly through Scott’s talk (mostly quietly) and posed afterward for this photo of the dueling bloggers. 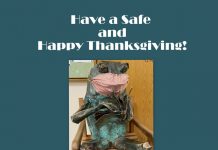 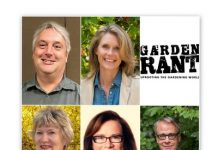