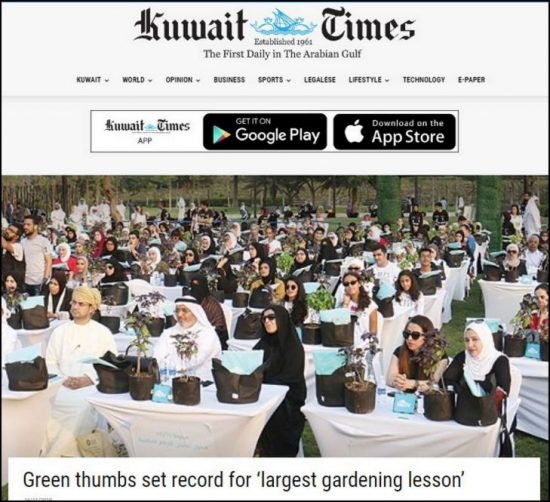 Time for some international news!

From the Kuwaiti Times we learn about a “gardening lesson” hosted by HGTV (so they’re everywhere now?) at which 286 participants attended and were “taught the essentials of growing their own organic produce.” The lesson also “debunked myths surrounding gardening in Kuwait, helping to inspire residents to get their hands dirty all year round.”

So first, I wonder about those gardening myths, which seem to include one about Kuwaitis not being able to garden all year round.” But what else?

The turn-out for the event and the fact that some waited for over an hour is also cited as showing “the great interest of the local community in gardening and planting.” Okay, cool.

The teacher for the event (Alzainah Al-Babtain), who created the PlantNMore website and Instagram account, declared it “an honor to be involved in this historic event.” Which raises the question – was the whole point to break a “record” and get some press for HGTV?  Coz it worked!

And how did they DO that? By inviting an “official adjudicator from Guinness World Records” to attend and “verify the attempt and present a certificate to the organizers.” The official declared that “I can confirm that a new world record has indeed been set today and that Kuwait is Officially Amazing.”

So Guinness isn’t just confirming the breaking of ridiculous records but also gets to name whole countries as “amazing”!

From the Kuwaiti Times we also learn that the channel we call HgTV and love to rant about is “the Middle East’s leading home and garden channel,” with such “globally popular home improvement and transformation shows as “Property Brothers,” “House Hunters” and “Flip or Flop.” The same crappy, nongardening shows as here!