Well, it’s comforting to know that in the midst of world chaos, economic devastation and unprecedented anxiety, the HOA Clipboard Police are still doing their jobs. 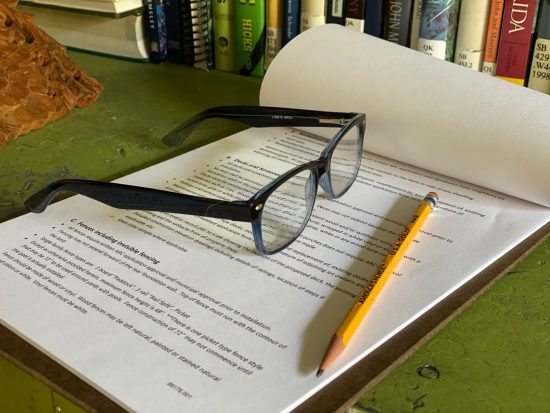 While chatting with a friend the other night about gardening and other landscape-related topics that make others in the virtual happy hour suddenly realize they need to get up and refill their glasses, she mentioned that she had just received a letter from her officious Homeowners’ Association (HOA) asking her to “please remove the dead plant on the left side of your home.”

That is to say, a clematis.

Once the plant had been removed, she was further commanded (on threat of fines and the weighty disapproval of her neighbors), to sign the letter, put a stamp on it and mail it back to Mrs. Kravitz and her band of tightlipped clipboard junkies.

“You have to understand,” my friend told me, “they’re trying to keep home values up – they’ve got to compete with _______.”  Here, she referenced a newer, stricter subdivision that furnishes its homeowners (term loosely used) with a laundry list of the many perennials, shrubs and trees they absolutely cannot plant without being clapped in irons.

That is to say, fined.

Yet I only slightly exaggerate. Setting such limits may not literally shackle the passionate, spontaneous gardener, but it sure as hell does figuratively. It restricts creativity and ensures boring, passive, tidy little landscapes which work better than a Unisom for inspiring deep REM sleep.

I know, I requested a copy of their covenants and made the mistake of bringing them to bed with me.  Four times.

So Much for Inspired Landscapes

If you live in that neighborhood, it is hoped that you managed to get through those covenants more successfully than I. For, should you be inspired one bright Saturday morning by two expressos and Jimi Blake’s gorgeous new book A Beautiful Obsession,  and excitedly tear out more than 20% of your plants in order to replace them with something that makes your heart sing; AND you do so without filing an “Architectural Review Committee Application” and receiving approval; you’d better prepare yourself for a letter from the garden police asking you to “be compliant” and hand over the trowel.

Obviously, I find this sort of thing disturbing.  I am a spontaneous gardener. Half of the projects I undertake in the garden involve about five minutes notice, a pile of old stone and the clearance plant racks at my local Big Box.  Though I do not live under the jurisdiction of the Clipboard Police, by my reckoning I break at least two HOA by-laws an hour, and that’s on a slow day.

Dirt happens. And it very rarely happens within accepted parameters, at accepted times, in accepted ways.

What is it that entices many of us to hand over our rights to own a gazing ball?

Though these neighborhoods often have community amenities such as pools or walking trails (my friend’s does not), fear of one’s neighbor – or potential neighbor – is at the core of each of these HOAs; and the successful (and subtle) marketing of such fear makes it much easier to swallow one’s doubts and sign up for a lifetime of surveillance.

The rules keep you ‘safe and happy.’ The HOA boards have ‘your best interests in mind.’  On one HOA blog (now THAT has got to be a boring gig), I read that “there is an undeniable, peaceful harmony within the neighborhood” when homeowners follow the rules and regulations.

Fascinating. Harmony apparently reigns when everyone plants Ilex crenata and forgoes a bench in the front yard to watch the pollinators.

Not that they’re encouraging many with the ilex.

After all, mere city ordinances can’t possibly think of everything.  What if your neighbor paints their house red? What if she decides to have a compost pile, or wants to stop wasting money and environmental resources and (gasp) hangs her clothes up to dry?

What if she’s just plain crazy and wants to plant a meadow instead of a lawn?  Well, sadly for many people living in these subdivisions, by-laws might protect against compost, meadows and front yard benches, but they don’t protect against ‘crazy’ – I’ve listened to too many first-hand accounts of wack-a-doo neighbors inhabiting tasteful homes with thoroughly approved siding to know otherwise.

Nevertheless, we are convinced that we can create utopia with these regulations – eliminating any variables that make us uneasy (referred to in previous generations as “the spice of life”).

It’s no longer enough to give your neighbor a list of the paint colors that won’t offend you and won’t inspire her, but now we can make sure her floral life resides firmly within established parameters.

And she gets to pay for the privilege.

Liberty for Security – A Good Trade?

So what are we giving up in return?  For if you support such petunia policing, do not kid yourself, you will give up something in return. Here’s a list just off the top of my head:

1)   The stifling of creative energy when a homeowner sees an unusual, beautiful plant in a nursery and finds that it’s not on the list of approved flora.

2)   The establishment of mini-monocultures which are particularly vulnerable to pests and disease. (You can bet that Impatiens walleriana and Knock-Out roses once featured as ‘approved plants’ on many lists.)

3)   A severely impacted nursery trade as this practice continues, and garden centers (quite rightly) respond to the needs of their customers. All begonias. All the time.

4)   A growing group of the public who is less physically connected to the incredible range of plants that Nature provides – and to the Earth itself.

5)   A neighborhood that looks like Disneyland – without the rides and definitely without Sleeping Beauty’s castle. (Pink is never an approved color.) Probably without gardeners.

6)   The inability of many homeowners to proactively take steps towards reducing their carbon footprint, such as hanging up clothes, having a compost pile, growing vegetables in sunny front yards, collecting water in rain barrels, etc…

7)   The desensitization of the public to similar standards of uniformity, and with desensitization, a growing uneasiness when ridiculing such practices, or holding them up to scrutiny – or indeed, contrasting them with the unique mix of cultures, practices and people that make up this country.

Whew – all because it’s more comforting to know your neighbor can’t go off the deep end and plant garish, hopelessly vulgar and completely lovely sunflowers in his front yard. And if he does, you’ve got the power to stop him – and make him pay for his transgression.

No matter how many matters of taste we attempt to remediate with various sections and subsections, there are hundreds more for which there is no answer. Which is why HOAs tend to become more restrictive over time – particularly if they are in desirable areas.

As my friend has found out over the last 16 years of increasingly pedantic letters from Mrs. Kravitz and her merry band, when you choose to live in a Homeowners’ Association, you not only sign up for the rules that are, but the rules that will be.

And “running for the Board” (as one is always instructed to do after receiving one of these letters and losing one’s freaking mind at an appeals hearing), is not a proportionate time/energy response when you just want to keep the rights you had when you signed up.

Ways Around the Madness

Certainly there can be compromises, and I have great respect for gardeners who work within the rules to create a garden they can be proud of.  In my book Big Dreams, Small Garden, I profiled Sheryl Massaro, a painter and gardener in Maryland who overwhelmed her HOA Board with a professional blueprint of her planned garden and a thorough list of the plants she wanted to use. She even became a Master Gardener during the proceedings which added weight to her application.

Lists, plans and credentials go a long way.  Sheryl got her garden, and as a result, her neighbors were inspired to do something similar. A win for everyone – including the HOA.

But Sheryl is not the norm.  Most people shut down in the face of bureaucracy. Including me.

According to the Community Associations Institute, over 20% of Americans currently live under the power of a Homeowners Association, and those numbers have grown steadily since the 1960’s.

That’s a lot of begonias folks.  Maybe it’s time to think about what we’re giving up, and why.