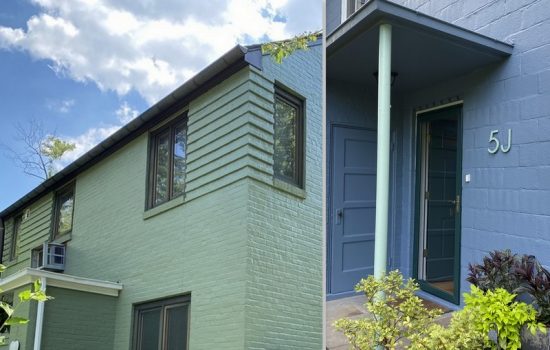 Thank you all for your many color suggestions for my front garden, in comments to this post. I love those colors, too!

But I had to choose, and for an accent color against the house, including parts of the house itself, it had to be a color approved by my coop.

Luckily there IS one I love, having seen it on a couple of whole houses recently – the mint green above. So far, I’ve used it on my house numbers and the pole holding up the front porch. Soon my overhead porch light will be replaced and at that time I’ll have the ceiling painted mint green. That should brighten up the doorway.

Though I agree completely that yellow is a great accent with blue, I didn’t choose it because upon reflection I realized there’s plenty of it already – in flowers and foliage. 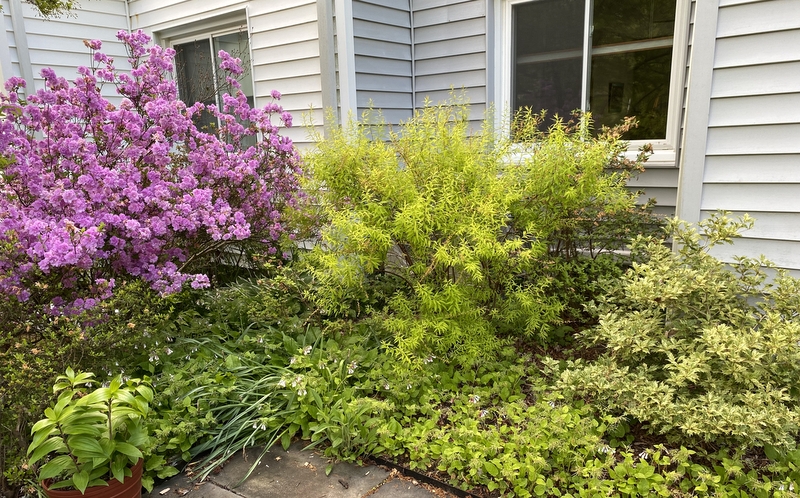 Here’s an example – the chartreuse foliage of ‘Ogon’ Spirea up against the bland siding I had until two weeks ago. It leafs out very early and loses its leaves very late, so that color is prominent against the house at least 8 months of the year.

To its right is one of two evergreen ‘Goshiki’ Osmanthus along the front that combine greens and yellows all year.

And now in mid-summer there’s lots of gold in the garden. 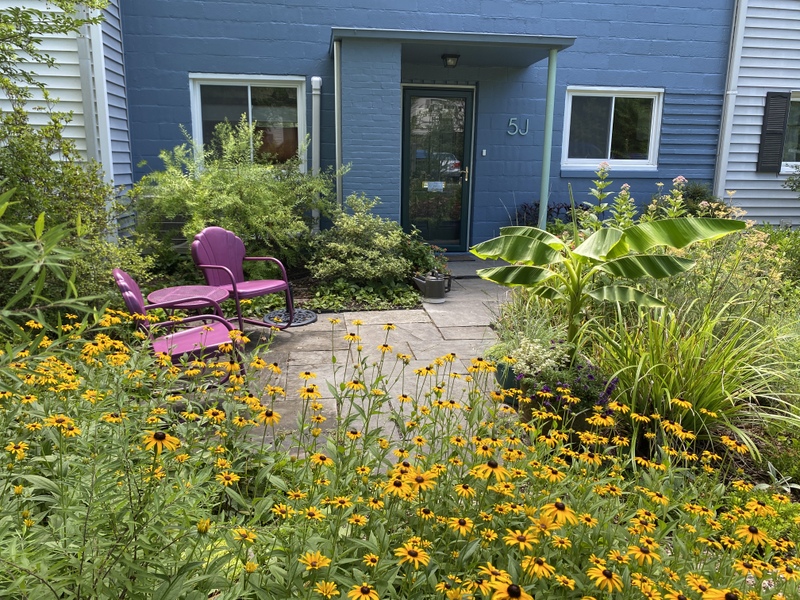 Seen from the sidewalk, this is just part of a mass of ‘Goldstrum’ Rudbeckias that bloom like crazy for weeks.

So, no need for yellow in a paint can. 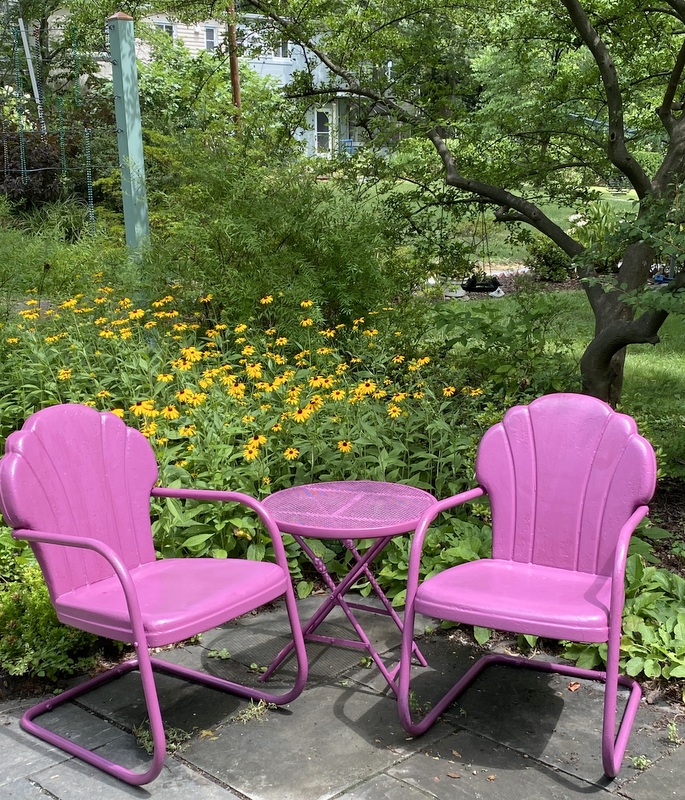 Something that needed color badly were these metal chairs, formerly in hot, boring black. I decided on purple and set out to the paint store to choose one that pops and suddenly spotted this fuchsia and knew I had to have it.  Enough pop for ya?

Behind the chairs you see more of the mint green – on a pole that supports wires I’m training vines on, to block my view of a parking lot. There are 7 such poles along two sides of the garden. (I’ll be posting photos of the vine progress later in the season.)

So I love the blue, mint green and fuchsia, and my neighbors tell me they do, too. So far, so good. But where to put some purple?

Maybe on these pots. When they’re not hidden by trailing Sweet Potato Vine, they’re awfully visible. On the right, they’re decorated for winter.

Or maybe I’ll paint them turquoise. Good thing I don’t to decide ’til the annuals die in early winter.

So now to find something fun to hang on the brick wall to the left of the door – at least during the growing season, to be replaced in the winter by a wreath.

I searched “outdoor wall art” and on Etsy I found Mrs. Browns Blooms, which sells flowers made from used tin cans. I love that they’re handmade in a little town in the Australian Outback. Also, the flowers are cheap – around $45 Australian for 17″ in diameter. That’s about $32 U.S.

Another Etsy artist shop I like is Salvage and Bloom, in Cincinnati. Also made of salvaged materials, mainly wood and metal, they cost more but it may be hard to resist.

Readers, any other ideas for garden-art shopping? 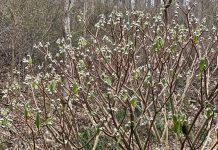 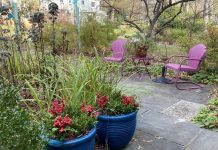