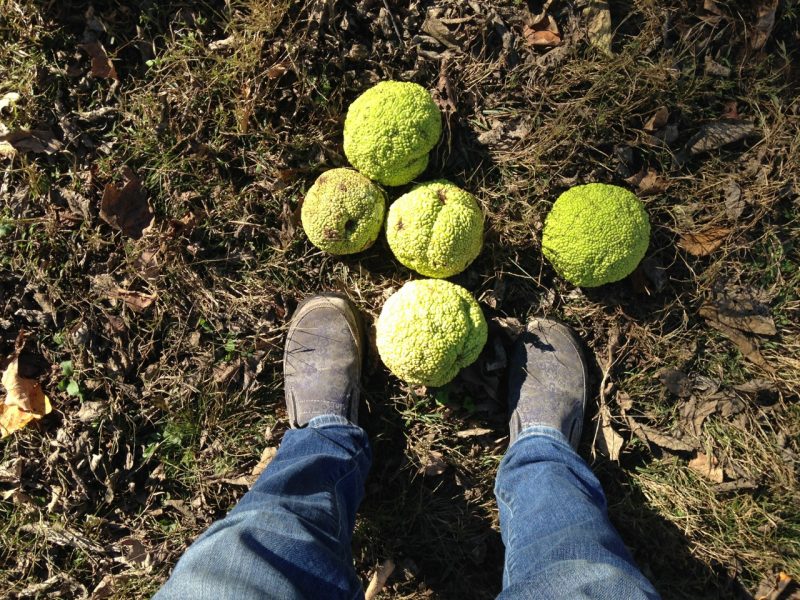 Osage orange fruit. Hedge apples. Monkey brains. Maclura pomifera. Yellow-green, squiggly, hairy spheres the size of grapefruits. If these are underfoot on a fall hike, I guarantee someone will mention the purported insect and/or spider repellant properties of an Osage orange. Rumor has it that a few of these bowling balls under one’s bed or kitchen sink will convince critters to stay outside. If this were true, I’d superglue a row of fruit along every baseboard of my house.

Alas, it isn’t true. Well, not really. Concentrated extracts do repel some insects in laboratory tests, but the magic ingredient (elemol) is too diluted in a lowly ball as is. My first guess was this bit of folklore originated because the tree itself is renowned for having few insect pests, and because the fruit, when pricked, oozes a milky latex, which in the plant world usually means “stay away.”

Ideally, I’d have submitted the urban legend to Mythbusters, they’d take the bait, and then I’d get to watch the team play with monkey brains and cockroaches in controlled experiments on TV. Such PR for the lowly Osage orange tree! But actually, the myth is already busted.

Apparently, all bug-repellant mishugas hatched from a single newspaper article in October 1950, in which a chemist’s poorly defined claims answer our prayers: that “a single Osage orange fruit placed in a room would drive ‘roaches and water bugs’ from the room within a few hours.” Syndication spread word faster than a cockroach stampede when the kitchen light flips on, and as the claim spread, it morphed. Myth genesis and metamorphosis are detailed aplenty in a 2014 article by entomologist Michael L. Ferro, published in the peer-reviewed journal Southeastern Naturalist. Ferro even includes a chart wherein the additions of key vocabulary (cupboard, pioneers, basement, distillate, etc.) are tracked on a timeline. Busted. 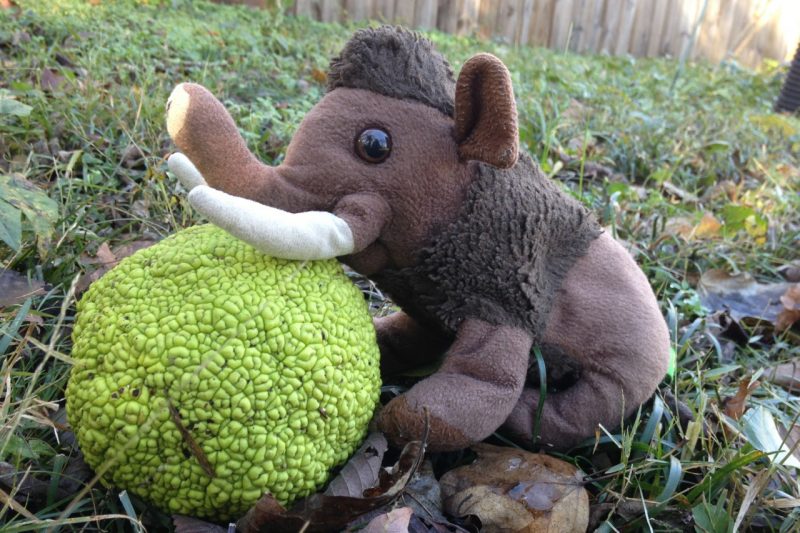 Well, then what are Osage orange fruits good for? Unless they fall onto your car or head, they’re fun: fun to roll, lob or kick. They’re fun for crafty people who assemble ludicrously heavy wreaths or seasonal “tablescapes.” As table fare, however, they are a disappointment. No one eats Osage oranges except the odd forager (and I do mean odd) and squirrels, both of whom must shred several inches of sticky layers to get to the tiny seeds at the core. What a waste. Ants get interested in the shattered remnants, but the bulk of the fruit surrenders to decomposition all winter.

Back in the day, the fruit’s original predators probably didn’t waste a crumb: [according to a 2012 post by Ranter Allen Bush] giant sloths and mammoths ate them whole and dispersed seeds via droppings. Not in Nashville. No megafauna for us. We were still a shallow sea at the time.

Our trees eventually got here thanks to humans—not via droppings, but via deliberate plantings. Osage orange fruit doesn’t repel insects, but the trees repel big mammals like mad. Try climbing one. Wicked thorns zigzag every twig. Settlers knew a row of closely planted trees made formidable livestock hedges. The same thorns that evolved to deter wooly mammoths from stripping every last hedge apple on a tree proved effective at keeping cattle and sheep on the right side of the fence. Nature’s barbed wire.

I gotta say I’m sad the fruit does not live up to its folksy reputation as forcefield against spiders and whichever insect happens to irk a person most. Personally, I’d love a natural defense against camel crickets in the basement, Hot Wheels-size cockroaches in the kitchen, and funnel spiders everywhere else. Those are my particular irks.

But as a fan of Osage orange trees, I’m more disappointed on behalf of the tree. Now that no one needs nature’s barbed wire, the only thing the tree has going for it is a mistake: the erroneous assumption that it repels pests. If people think the fruit is good for something, they’ll value the tree, seek it out, protect it, maybe even love it? They’ll see it.

Now that we don’t plant it on purpose around the feed lot, it is the pest-haters who unwittingly distribute the next generation of trees. First came mammoths, then ranchers, and now eBay customers. Right now on eBay, vendors are shipping boxes of Osage orange fruit by the half dozen, expressly for insect and spider control. And what happens by springtime, when homeowners notice their pest control balls have begun to brown and pucker? Out from the cupboards they go, hopefully straight to the compost pile or the side yard or the woods or the drainage ditch, where those tiny seeds can take root near or far.

Yes, I know in some places, Osage orange can be a pest itself. I also admit it is categorized a “significant threat” by the Tennessee Exotic Pest Plant Council. Oh, Lordy. So maybe we don’t need more trees, but we do need to see the ones we have. They are one clue in knowing where we are.

Right now, in late fall, they’re hard to miss. Just look down. Or, if the fruit have bowled themselves to the lowest level (usually a storm sewer), look up. The mammoth tree that bore them won’t be far away.