The weeds and botanical inaccuracies have also entered the world of comics. In 1966, Batman had a new nemesis, Poison Ivy, a botanist turned bad. (Brilliant!, says the botanist and author of this blog.) The poison ivy plant is one of the most obnoxious weeds of North America. 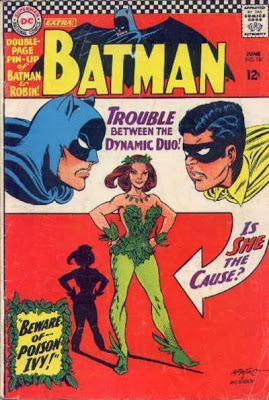 “Poison Ivy is an enemy of Batman. She is depicted as one of the world’s most prominent eco-terrorists. She is obsessed with plants, botany, and environmentalism. She uses toxins from plants and her own bloodstream for her criminal activities, which are usually aimed at protecting the natural environment.”
(link to this quote and more information about Poison Ivy at Batman Wiki)

Poison Ivy is of course named after one of North America’s most troublesome weeds, the poison ivy (Toxicodendron radicans) in the family Anacardiaceae, same family as the tasty cashew nut and mango, as well as poison oak and poison sumac. This incredibly common woody plant, which can be a shrub or a liana, can cause absolutely horrible allergic dermatitis (skin reaction) with liquid-filled blisters and sores that can take weeks to heal. I know this first hand; I became allergic after moving to the US.

What is interesting with Batman’s Poison Ivy is her leafy coverage, which has changed over the years.  Now, remember, most Americans know how poison ivy looks like, ‘leaves in three, leave them be’.  In reality the three ‘leaves’ all belong to the same leaf, which is divided into three separate leaflets. 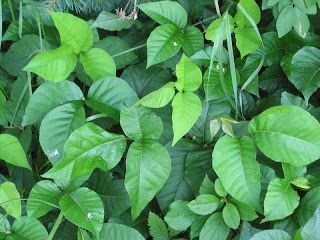 Poison ivy, leaves are divided into three separate leaflets, with the middle leaflet stalked. Do not touch this plant!
(Photo by Esculpio, public domain. link)

But there is a sort of namesake, English (and Irish) ivy (Hedera helix and H. hibernica), which is an unrelated, non-allergenic European plant that has spread through horticulture across North America.  English ivy has simple leaves with three lobes.  Since the common names are similar, and both have green leaves and are climbing, people confuse these plants. 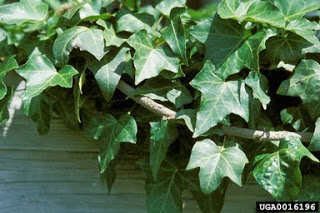 The subsequent illustrators of Batman’s Poison Ivy girl has not always been able to make the distinction between poison ivy and English ivy, and as a result, there is a lot of confusion, especially among non-DC comics people making illustrations, costumes, and such when it comes to the right leaf to draw or use.

Now, why is this important?  Well, accessorizing Poison Ivy with the wrong plant is kind of giving Luke Skywalker a sunflower to fight with instead of a lightsaber.  One is powerful and strong, the other is just pretty. We are not talking imaginary futuristic plants here, we are talking about living, existing species.  Nobody would name a character ‘Lord Bear‘ and then let him wear a deer skull on his head, now would they? The same thing should matter for plants, especially toxic plants.

So, lets see who got it right? These are true poison ivy leaves. 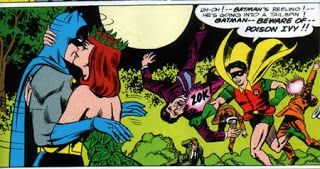 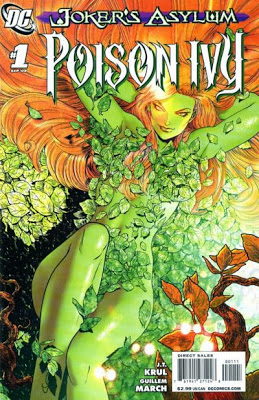 Poison ivy on the cover of Joker’s Asylum issue 1, 2008 (DC comics).
A little hard to tell on this, but there are three-divided leaves on the brown branch at the bottom
right and the leaves do not look like English Ivy at all.  (c) DC Comics, fair use, link.

A close-up of the above.

Poison Ivy in 1981, also with correct leaves on.  © DC Comics, fair use, drawn by Irv Novick and Steve Mitchell, link.

And in the last ten years, things started to go wrong.  Here we have sometimes English ivy instead of Poison Ivy. 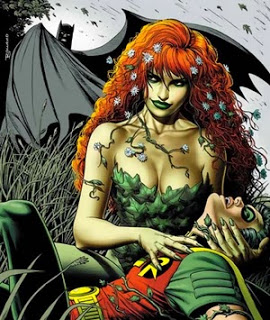 The leaves are clearly broad and have three lobes, so English ivy it is.
Promotional art for Batman: Gotham Knights vol. 15 (2001). Illustration by Brian Bolland.
Close-up below.  © DC Comics, fair use, link. 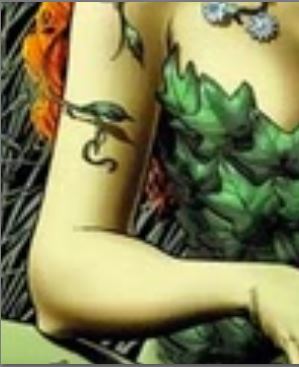 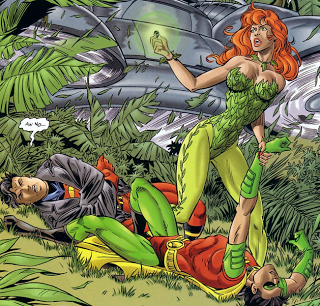 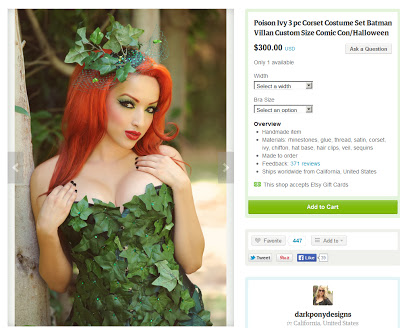 If you are going to buy a Poison Ivy Halloween costume (for $300), do you want it with English ivy leaves?  Here is one of them.  Screenshot from etsy, © darkpony designs, fair use, link.

And some are just using some generic leaves, of uncertain species identities or are just unclear: 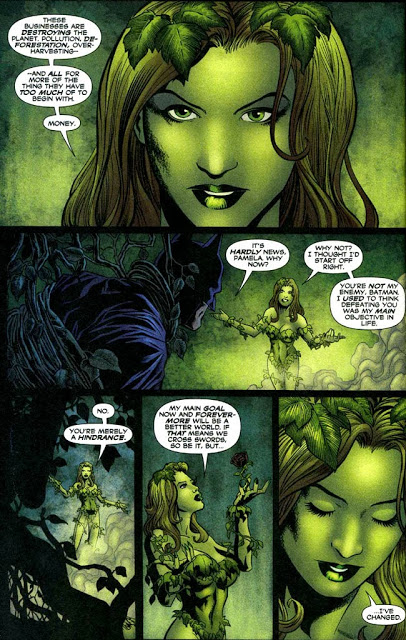 Poison Ivy in a DC comics, with leaves in her hair. Closeups below.  © DC Comics, fair use, link.

On the upper frame, she appears to have true poison ivy in her hair. 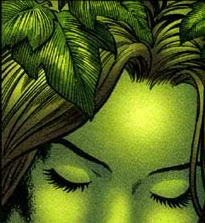 But on the bottom right frame the leaves suddenly have become more lobed.
This still possibly could be poison ivy, but it is not typical shapes at all. Looks more like English ivy now.

And, of you want to simplify, just remove all leaves and then you don’t have to worry about species identify:

Lena Struwe is a professor in botany and evolutionary biology at Rutgers University in New Jersey, where she teaches college students about the uses, biodiversity, and naming of plants from the whole world.  She also runs the blog Botanical Accuracy, where botanical mistakes in media and on commercial products are highlighted and corrected.  Her official Rutgers web page is here.