They say a garden dies with the gardener, but mine has other plans:  Step one, reaching through my window and strangling me in my sleep.  The rest will be easy.  Consume my house, 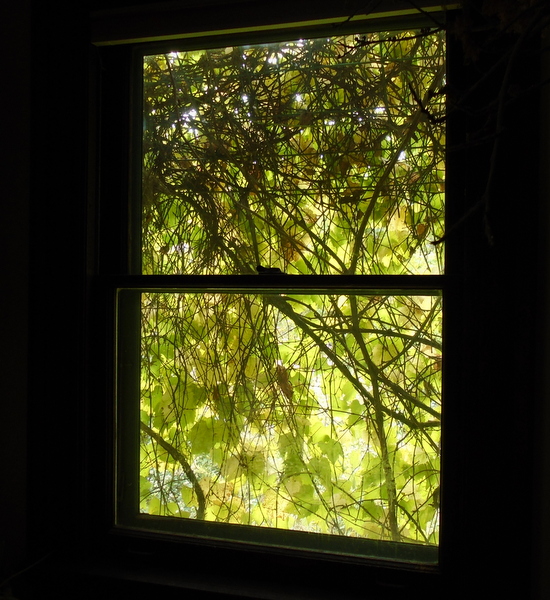 head next door, finish off the rest of the block and just keep on growing.

It’s my own fault in so many ways, and I really sealed my fate the day I brought home, and only half read, “The Exuberant Garden and the Controlling Hand” by William H. Frederick.

As a plant geek and short person, I loved bizarre, obscure and preferably huge plants.  I was a sucker for J.L Hudson’s seed catalog, with his radicalizing descriptions of gems like wild dagga and giant yellow hyssop.  And as a gardener of the male persuasion, I also recognized early on the fierce cutthroat nature of the sport.  There are few moments in life more rewarding than saying to a rival, “Oh, you don’t know Agastache nepetoides ?  It’s such a weed!”

Weed indeed.  It’s the seventh circle of my gardening hell, just before white snakeroot and just after Impatiens balfourii, Kashmiri touch-me-not, with its ballistic seed pods.  Worse yet, the Impatiens arrived unintentionally, a clear karmic smack from St. Fiacre for stealing a clump of Virginia bluebells from the public garden down the street, the Mertensia a thug in its own right. 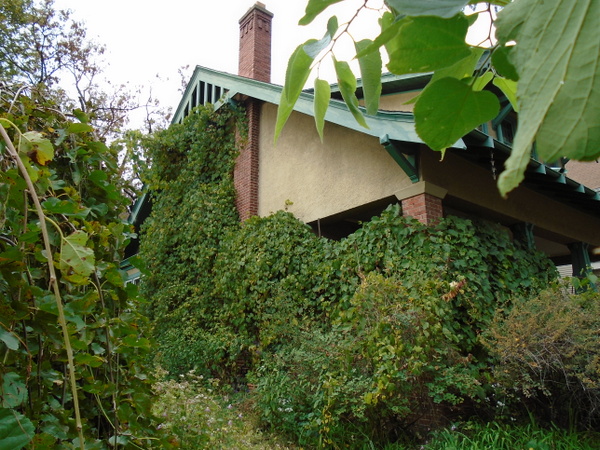 My yard is a living litany of very bad plants and my fate is the fruit of laissez-faire.  When the seedless table grape I trellised near the chimney sprouted from its rootstock, did I intervene?  No, I encouraged it and, quite literally, supported it.  “Deciduous awnings – what could be better?” I thought.

Now it’s been chosen by the others to strangle me.  That’s if the looming widow-maker hanging in the black walnut from our last tornado doesn’t get me first.  The same storm sent a chunk of my half-dead box elder through the neighbor’s window, taking frame and draperies with it.  Think I’d sit up and take notice?  I’ll bet my neighbors did.  Not sure.  For some reason they don’t talk to me.

Well, no more Mr. Nice Guy.  This sleeping dwarf has been awakened.  I’m not going down without a fight.  We humans have some allies too, you know.  The usual intervention in these parts is goats.  That’s right, goats.  Even the University uses them to beat back rampant growth.

“Minimize your carbon hoofprint.” they claim, a worthy goal surely, but would they be up to the job?  My job?  A job like mine needs bigger feet.  But whose feet was the question.  The answer came quickly, just a few days ago, from the unlikeliest place ever for good garden advice, my on-line Spanish course.

Not everything they teach me is so immediately useful, mind you.  Like the other day, “El conejo come carne.”  Well, no, the rabbit does not eat meat, so why would I say that except to lie to a small child?  But this, “Es seguramente mi elefante.”  It’s probably my elephant.  Well, brilliant!  How could it have slipped my mind? 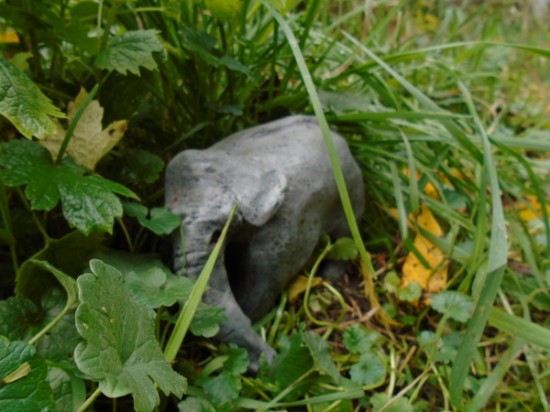 Sure, it’s been fifty years since my stint in the Peace Corps in East Bengal, but having an itinerant elephant amble into your yard begging banana trees via her spokes-mahout?  That’s not the sort of thing you easily forget.  Nor the swineherds who followed up, mongoose at the ready should a stray cobra get flushed from the underbrush.  But they did the job, and did it beautifully, quickly, and best of all free.

Desperate times call for desperate measures.  We’ll start with just the elephant and see where we go from there.  I just hope she gets along with my dogs.  Which reminds me – I’ll need a much bigger scooper.

Joe Schmitt grows cut flowers in Wisconsin and is often caught playing with his words.