An article published Jan 6, 2014 in The New York Times (‘Mutant Petunias Sing the Blues’) about some exciting new research on the evolution of blue color of some garden petunias was illustrated with this nice photo: 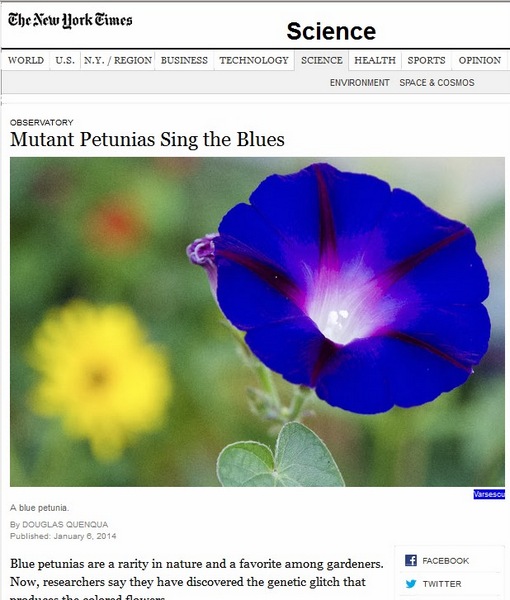 This is not a blue petunia, it is a morning glory.
Screen shot from NY Times website, Jan 6, 2014, by BotanicalAccuracy.com

Now, the only problem is that this is not a petunia. Petunias are members of the genus Petunia (simple!) in the Solanaceae, the potato family. This is unfortunately a photo of a morning glory, in the genus Ipomoea in the family Convolvulaceae, related to sweet potatoes. There are several kinds of morning glories, all in the same family, and both morning glories and petunias come in a wide array of flower color patterns.

The very interesting research article has the right plant in its illustrations. 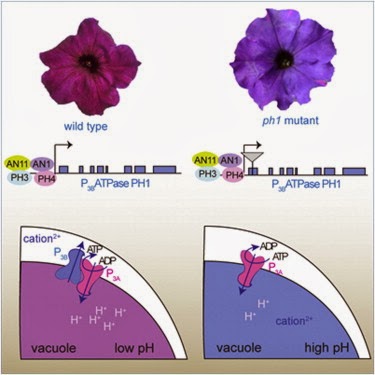 How could this happen in a  news article? Well, I guess someone at The New York Times did a stock photo search for petunia and found a nice photo, used it, and didn’t realized it was mislabeled. Stock photo archives are full of mislabeled plants. So you pay for a photo, and then it turns out to show the wrong plant – not really what you paid for. Here is the source at iStock by Getty images: 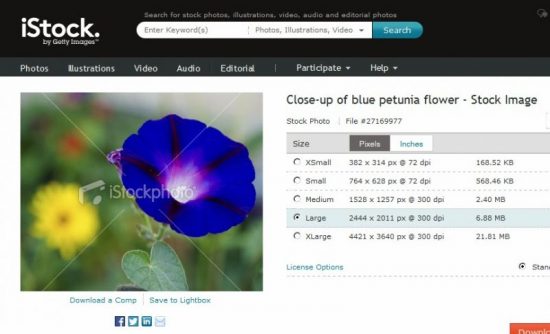 The source of the wrong petunia image.
Screen shot from iStock by Getty Images website, Jan 6, 2014, by BotanicalAccuracy.com

Now, how do you tell a petunia from a morning glory? There are a couple of differences. Morning glories usually have heart-shaped leaves (like the ones on the photo above). Petunias have smaller, hairy oval-shaped leaves. Morning glories are climbers that twist their stem around something to climb higher and higher. Petunias grow like little bushy herbs, no climbing and twisting in them. The colorful petals are fused in both species into a giant flaring trumpet (the corolla) and can look similar, but the edge of the corolla is mostly even in morning glories, but uneven and notched in petunias.

Here is a petunia: 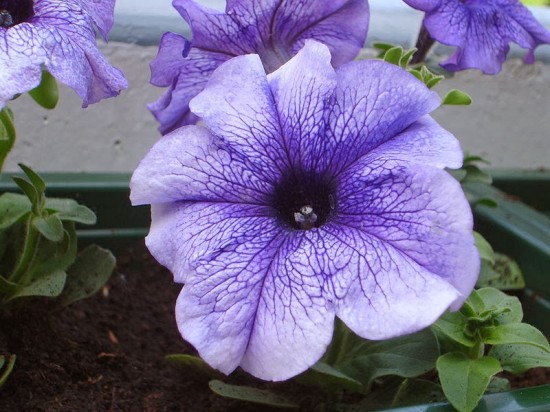 Here is a morning glory: 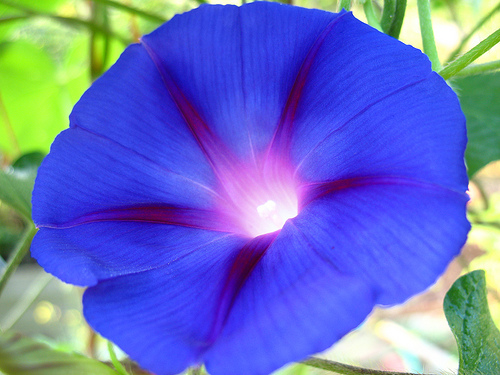 I then learned that the wrong photo was first used by the renowned science magazine Science [!!!] in their highlight of this research.  See their article titled “ScienceShot: Broken Pump turns petunias blue“, dated Jan 2, 2014. So The New York Times probably just reused the photo provide by Science. Here is the screenshot: 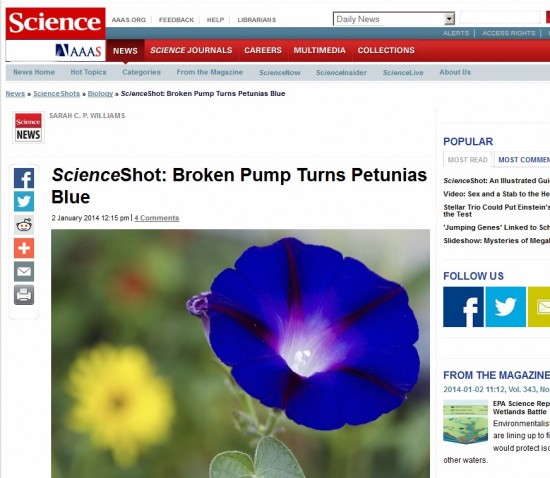 The first use of the wrong petunia image, in Science.
Screenshot from Science Magazine, on Jan 5, 2014, by BotanicalAccuracy.com

Subsequently, International Science Times picked a new photo for their article about this research, and again, a morning glory is on the photo, not a petunia. Screenshot below: 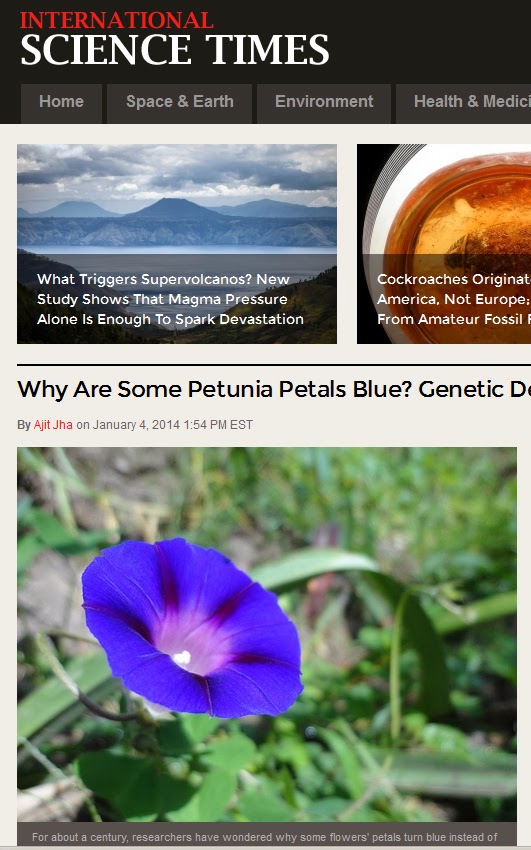 Another morning glory presented as a petunia. Screenshot from International Business Times website, Jan 7, 2014, by BotanicalAccuracy.com.

Science fixed the photo error within a few hours of being notified, and now display petunias with their article.  Excellent! Here is the new photo, provided by the authors of the research study, Francesca Quattrocchio and Ronald Koes. 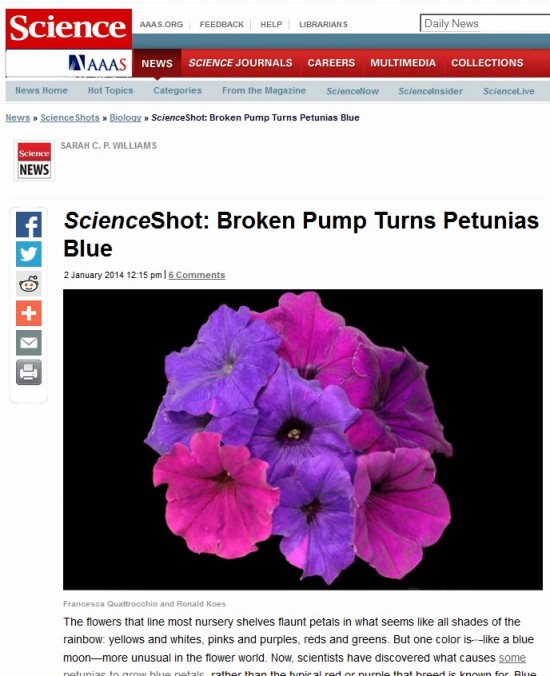 A new photo with abundant and correct petunias on the corrected Science web page.  Screenshot from Science magazine website, Jan 9, 2014, by BotanicalAccuracy.com.

Some other media organizations and companies got it right from the beginning.  Kudos to International Business Times, NBC News, Discover Magazine, Headlines and Global News.

After being notified of the error, the New York Times removed the photo for their article and provided a correction on Jan 10, 2014. Thank you!

Originally published on Botanical Accuracy.  Lena Struwe is a professor in botany and evolutionary biology at Rutgers University in New Jersey, where she teaches college students about the uses, biodiversity, and naming of plants from the whole world.  She also runs the blog Botanical Accuracy, where botanical mistakes in media and on commercial products are highlighted and corrected.  Her official Rutgers web page is here.