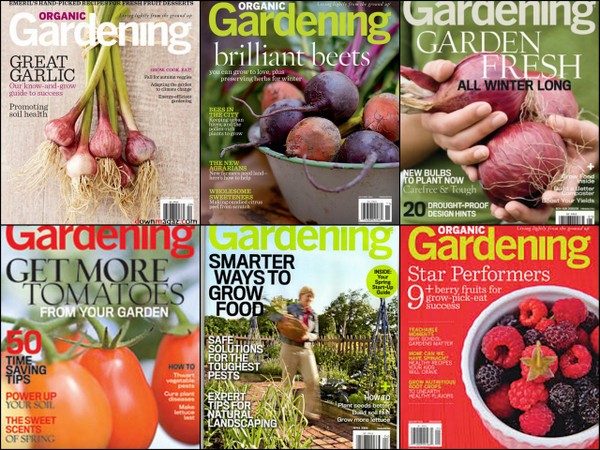 During a fierce summer thunderstorm last Friday night, I found out that Organic Gardening will no longer be with us next year. As the lightning flashed and the rain hammered down on the tin roof of the packing shed, I stared in disbelief at the text on my phone’s little screen:

Rodale’s Organic Life? No more Organic Gardening? How is that possible, with interest in organics, sustainable farming, and local food at an all-time high? What’s going on?

I had been washing and cleaning summer leeks for market the next morning when I sat down on a cooler for a break, while the storm passed. Glancing through my messages, I opened the innocent-looking email from Doug Hall at Organic Gardening right away. I have been testing varieties for the magazine for over a decade now, in Charlotte, North Carolina, and Doug is in charge of all OG’s test gardeners around the country. Besides receiving a terrific annual assortment of seeds in the mail, I get to be part of a network of organic gardeners from Florida to Canada.

We have been eager to learn the name of Organic Gardening’s new editor, but news of the end of OG came as a shock. Starting with the February/March 2015 issue, Rodale’s Organic Life, a new “lifestyle” magazine covering cooking, house and home, style, and gardening, too, will replace Organic Gardening. They call it “rebranding”.

Not everyone is hopelessly bummed out about this. My fellow test gardener Kathy Shaw, in Wisconsin, hopes the new magazine will evolve to include “how to live gently on the land; practical how-tos; bios of good stewards; ecological reporting; gardening advice; and usually some food related stories, too…”

“I think most gardeners make the best of the situation,” Kathy says, “bugs and weather have taught them that too well.”

Besides, Organic Gardening has changed its name before – nine times, Doug says – and been through plenty of makeovers and editors. The last big change in 2010 already added lots of lifestyle content – recipes, designer inedible landscaping, that sort of thing. A few gardeners grumbled, but most (including one GardenRanter) accepted the changes. The magazine has since won awards and gained circulation (though ad revenues have been down, a problem plaguing all print media.)

This time, though, something feels different. I agree with another of my fellow testers, Jackie Smith in Minnesota, who thinks this current change sounds “a bit more drastic” than past ones.

“Organic Gardening was the only remaining magazine where food gardening was the main focus.” Jackie says. “If the new magazine leaves that out of their format, where is the public to turn?”

It has been a long, long time since Mr. Wood, my seventh grade gardening teacher (Can you imagine? Gardening was an official class in public school!) changed my life by handing me my first copy of Organic Gardening and growling “Boekelheide, you read too much. Here, read this.”

Over my dad’s objections, I promptly started growing turnips in a corner of our green suburban lawn in Los Angeles. To me, Organic Gardening’s central message was loud and clear: I could grow my own food right where I lived. Me, by myself, I could grow my own delicious tomatoes, like both my grandmothers grew back on the farms my parents had fled, not those flavorless square things at the supermarket. I could take at least partial control over one of the most basic necessities in my life – food.

I could be a producer, not merely a consumer; part of the solution, not part of the problem.

As the decades passed, Organic Gardening continued to lend comfort and support, encouraging me to make compost piles, teaching me to save seed, and constantly reminding me that worms, birds and bees were friends I shouldn’t poison for the sake of appearances. For me and countless gardeners, Organic Gardening became our Bible for backyard and vacant lot food gardens, individual and community, all around the world.

When J.I. Rodale put out the first issue in 1942, originally “Organic Farming and Gardening,” only a handful of people had ever heard of “organic gardening,” or “organic” anything else, for that matter. “Organic” is now a multi-billion-dollar-a-year consumer market, with far more people buying organic than growing organic (obviously, for me as an organic farmer, that’s not entirely a bad thing). But Organic Gardening always left a crack in the great wall of consumerism, encouraging people to grow something themselves, if only a flowerpot of Genovese basil beside the back door.

Rodale borrowed the term “organic” from Walter James, an English noble – Lord Northbourne. James’s 1940 book Look To The Land drew a distinction between viewing a farm as a living organism (thus, “organic”) and treating it as a factory (“chemical farming”). James was inspired by Austrian philosopher Rudolph Steiner, who grappled with questions of science and spirituality. Rodale added a Moses-like twist to this organic definition, a list of “thou shalts” and “thou shalt nots.” (“Thou shalt use compost”; “thou shalt not spray DDT”.)

The debate over these “holistic”  vs. “prescriptive” definitions of organic rages on today. Organic Gardening offered a unique bridge between the two perspectives by keeping things grounded in practical gardening. That’s another thing I will miss if it morphs into an organic vision of Southern Living magazine, a strange parallel universe where folks barbecue tofu and drink gluten-free iced tea with Stevia.

As the storm rumbled away into the darkness, I thought back over years of Organic Gardening urging me to grow my own food, without spending a fortune and without wearing a hazmat suit. Without Organic Gardening, would I now be growing this good organic food for other folks to eat? I doubt it.

The patter of raindrops, shading slowly into silence, became a soundtrack for the departure of a beloved friend.

Don Boekelheide is an organic grower at the the Lomax Farm Incubator in Concord, North Carolina, and a National Test Gardener for Organic Gardening. His writing appears regularly in the Charlotte Observer.